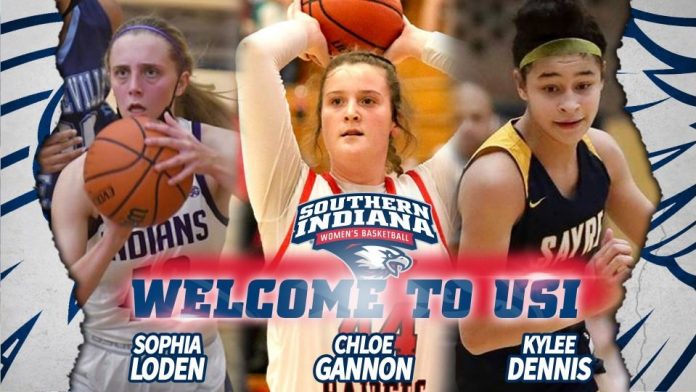 “We are so excited to welcome Sophia, Chloe, and Kylee to our Screaming Eagles family!” Head Coach Rick Stein said.

Loden, from Mascoutah High School in Illinois, was named to the 2022 Illinois Basketball Coaches Association All-State Third Team for Class 3A, 2022 Associated Press All-State honorable mention, and the 2022 Mississippi Valley Conference Co-Player of the Year. She has also been on the Mississippi Valley All-Conference teams throughout her high school career, receiving first-team honors in 2022, second-team laurels in 2021, and honorable mention accolades in 2020.

In her junior 2021-22 season, Loden averaged a double-double at 22.7 points per game and 12.5 rebounds per game. She also tallied 3.6 steals per contest and 112 total. Loden entered her senior year of high school with 1,068 career points.

“Sophia is a versatile player that can change the game in many ways,” Stein stated. “She plays with a lot of energy and is a great competitor.”

Gannon is from Coffee County Central High School in Tennessee. The center averaged 13.6 points per contest in her junior season in 2021-22, shooting at a 57 percent clip. She also claimed five rebounds and had over one block per outing. The District 6-4A MVP helped lead her high school to its 5th consecutive district title last year.

Gannon entered her senior season with 432 career points, 173 rebounds, and 41 blocks with a career field goal percentage of 54 percent.

“Chloe is a post player that can make plays both at the low and high post,” said Stein. “She has good size and is a tough finisher in the paint.”

Dennis, out of Sayre High School in Kentucky, averaged 15 points per game in 2021-22 to earn a Kentucky Junior All-Star Team selection. She was also named All-State Third Team, All-Region First Team, and All-District First Team as a junior.

In 2020-21, her sophomore season, Dennis averaged 24 points per contest, finishing 8th in Kentucky in scoring. She reached the 1,000-career points plateau and received All-Region First Team and All-District First Team accolades as a sophomore.

“Kylee is a lengthy combo guard with a great feel for the game,” Stein commented. “She is a playmaker that can create for herself and her teammates.”

The three signees will be USI Women’s Basketball’s first true freshman class of the program’s NCAA Division I era in 2023-24 following the return of an experienced group with no freshmen on the 2022-23 roster.