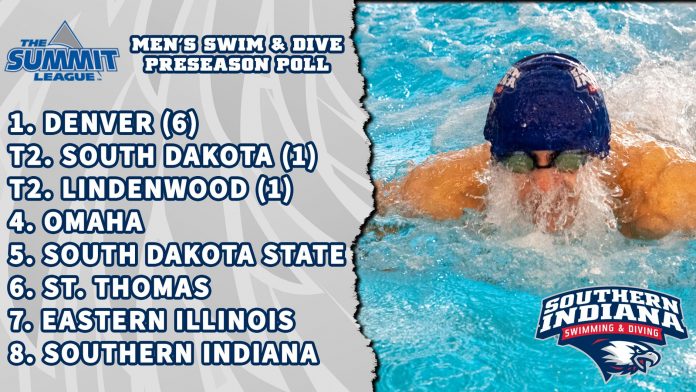 EVANSVILLE, Ind. – University of Southern Indiana Men’s Swimming & Diving is predicted to finish eighth in The Summit League this season. The Summit released the preseason predicted order of finish Wednesday morning along with the 2022-23 Preseason Swimmers and Divers to Watch, where freshman multi Garrett Crist (Bargersville, Indiana) and diver/breaststroke Lane Pollock (Boonville, Indiana) landed themselves on the list. The Screaming Eagles will compete in the program’s inaugural season after joining The Summit League in early 2022.

“We are excited about our first year of competition and doing so within the Summit League,” says USI Head Coach Cameron Kainer. “This league is comprised of teams who have qualified for the NCAA meet and show year in and year out what it takes to compete at that level. We are excited about joining this prominent league and I think we are planning to turn some heads in our first season.”

Along with the preseason poll, the Summit announced its 2022-23 Preseason Swimmers and Divers to Watch, where Crist and Pollock earned two of the 16 spots. Crist is a Center Grove High School product who was a three-time All-Conference and two-time All-State competitor. He also was named to the NISCA All-American swim team in 2021. Pollock, the lone Eagles’ diver, comes out of Boonville High School where he collected 12 athletic letters in three different sports. He tallied two state appearances and led his team to back-to-back conference championships.