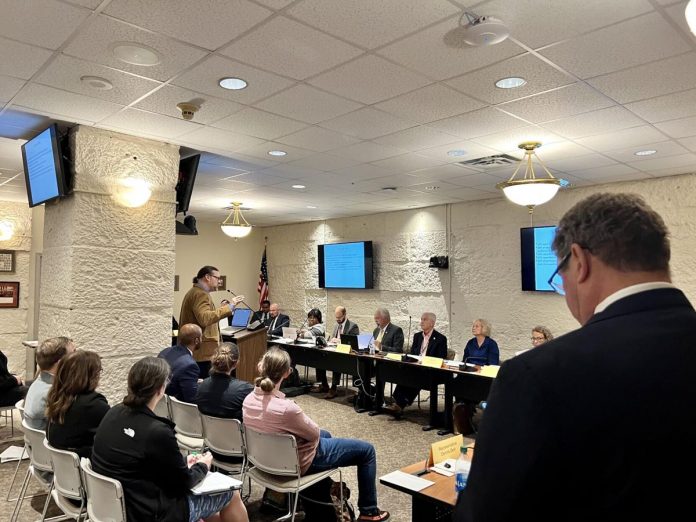 The Interim Study Committee on Public Health, Behavioral Health and Human Services met Tuesday to discuss cannabis in Indiana—a topic that had people crowding into the first-floor committee room inside the Indiana Statehouse.

A main focus of discussion was how the state can catch up to others that have already passed legalizing legislation and the impact restrictions currently have on Indiana farmers and businesses.

Farmers called for tapping into the comparable $1.79 billion Michigan marijuana market to provide and keep jobs in the state while increasing tax revenue.

Others used statistics from a 2018 poll indicating that a majority of Hoosiers—81%—support legalizing cannabis either recreationally or medicinally.

Katie Wiley from Stash Ventures, a Michigan-based hemp company, said the company was founded in Indiana but has had success in Michigan because of the legislation passed there.

She said that by legalizing marijuana now, the state could catch up to and improve upon other states’ legislation on the issue, rather than fall behind and miss out on opportunities waiting on the federal government to legalize cannabis nationally.

She was just one person asking for regulations from seed to store so that consumers know what they’re getting and the products are safer and of better quality.

Eric Simo, the owner-operator of Hempin LLC in Columbus and Crothersville, spoke out about the Indiana law making the sale of the hemp flower illegal, noting the losses his company has taken as a result.

“We have to move forward … We’re kind of like the laughing stock of the Midwest… It’s sad and it’s inhumane,” Simo said.

“Come into my store, come down, spend an hour and talk to the citizens of Indiana that are desperate,” he said. “They don’t want pharmaceuticals. They don’t want opiates.”

Mike Ripley from the Indiana Chamber of Commerce said it is maintaining its 2017 position, opposing “the legalization of marijuana in any form for recreational use, for medical or therapeutic use until the time when efficacy and safety have proven to be consistent through clinical trials.” The agency does support the use of isolated components of marijuana cannabinoids for medicinal purposes if approved by the FDA.

Brock Patterson from the Indiana Prosecuting Attorneys Council said a main concern falls on the need to improve testing capabilities in labs and associated costs. And expressing health concerns, the American Cancer Society said that if legalizing legislation passes, smoking marijuana should be prohibited in public under no-smoking laws.

The next meeting is scheduled for Oct. 4.