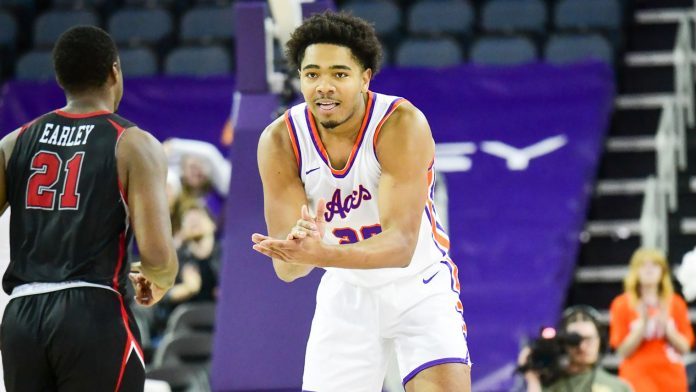 Mustangs Fend Off A Challenge To Defeat Aces 55-47

UE Battles From Start To Finish

DALLAS – Blaise Beauchamp knocked down four 3-pointers to keep the University of Evansville men’s basketball team right in the thick of the battle before a late stretch by the Mustangs saw them win by a score of 55-47 inside Moody Coliseum.

Beauchamp’s top scoring effort of the young season saw record 16 points while Yacine Toumi picked up his second double-double of the campaign as he totaled 11 points and 10 rebounds.  Three SMU players reached double figures with Zhuric Phelps pacing the squad with 15 points.  Zach Nutall scored 13 while Efe Odigie picked up a double-double with 10 points and 11 caroms.

“We had a good gameplan coming in and played pretty well.  I told our guys to stick with it and it will come together,” Aces head coach David Ragland said.  “Once SMU got that lead, they held onto it.  We gave ourselves a chance and climbed back into it.  There are many positives that we can take from today.”

Yacine Toumi got UE on the board before SMU came back to score the next seven points to go up 7-2.  Kenny Strawbridge Jr. ended a drought of six misses in a row and Blaise Beauchamp drained a triple on the fast break to cut the deficit to 9-7.  Beauchamp struck again with 12:44 remaining in the half, draining a shot to tie the game at 9-9.

With the offense knocking down a few shots, the UE defense did the job on the other end.  Evansville forced 11 consecutive missed shots and three turnovers in a span of eight minutes.  Despite the defensive pressure, UE could not muster up the offense on the other end with Strawbridge picking up a field goal to make it an 11-9 contest as the half entered the final eight minutes.

Sekou Kalle provided the energy over the ensuing stretch as he recorded a pair of dunks to put UE up 17-14 with Toumi adding a layup that extended the lead to 19-14 with just over three minutes showing.  Evansville was able to keep the advantage, heading into the break with a 21-17 edge.

After turning the ball over just twice in the first half, five turnovers in the first two minutes of the second half led to a 6-0 run by the Mustangs to put them in front at 23-21.  SMU continued to clamp down on the Aces.  Over the first 6:49, UE missed all six attempts and turned it over six times as they solidified a 30-21 lead.

Marvin Coleman II ended the stretch with a layup with a 14:11 showing on the clock and Beauchamp followed with a pair of 3’s that saw Evansville make it a 36-33 game just past the midway point of the final stanza.  Gabe Spinelli went coast-to-coast minutes later to get Evansville within a pair.

A Zhuric Phelps layup with 4:15 left in the contest put SMU up 44-38 but Evansville was not backing down.  It was Beauchamp doing the damage once again as he connected on his fourth triple of the day before draining a pair of free throws to get UE within just one (44-43) as the game entered the final three minutes.  SMU posted the next two field goals as they pulled back out to a 5-point edge.  After pushing the lead to 52-43, the Mustangs would hang on to win by a score of 55-47.

Evansville outrebounded SMU by a 46-42 margin while the Mustangs finished with a slight edge in the final shooting tallies.  The Mustangs completed the game at 32.1% with UE checking in at 28.8%.  UE remains on the road Wednesday for a 6 p.m. CT game at UCF.