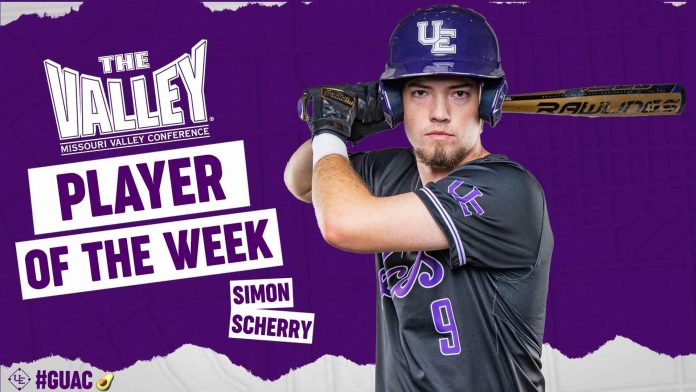 EVANSVILLE – Following another MVC series sweep, University of Evansville baseball shortstop Simon Scherry has been named Missouri Valley Conference player of the week, it was announced in a release from the Conference office Monday afternoon.
Helping Evansville to a three-game sweep of Illinois State, Scherry was hot a the plate, leading the team with a .583 batting average on the weekend. Scherry record seven hits in 12 at-bats, including a double, while scoring three runs, including the game-winning run in Evansville’s 5-run ninth-inning comeback over the Redbirds on Friday night. Scherry’s 63 hits this season are tied with Mark Shallenberger for the most on the team and for fifth in the MVC in the category. In the field, Scherry has saved countless runs with his defensive play, ranking tops among non-first baseman in the MVC in double plays with 31.

The Aces are back on the field at German American Bank Field at Charles H. Braun Stadium on Wednesday night for a 6 PM first pitch against SIUE.