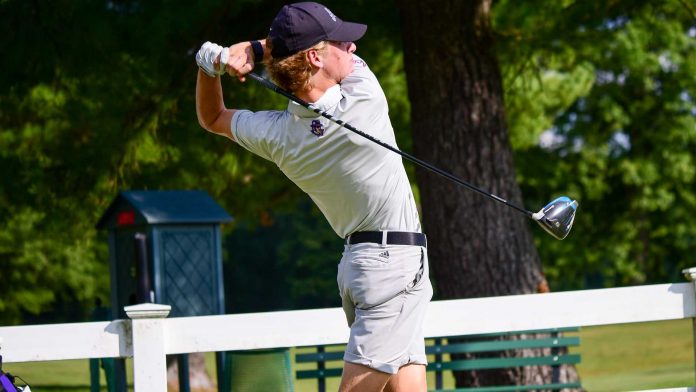 At the conclusion of Monday’s action, the Purple Aces had finished 16 or 17 holes of round two.  Leading the way for UE is Nicholas Gushrowski.  He opened the day with a 3-over 75 and is currently 5-over in his second round through 17 holes.  He is tied for 39th.  Behind him is Luke Schneider.  His opening round finished at a 7-over-par 79.  With 17 holes complete in round two, he stands at 2-over.  He is tied for 48th.

Daniil Romashkin is third on the team and checked in with a 77 in the opening 18 holes.  Romashkin is 6-over through 16 holes in round two and is tied for the 60th spot.  Behind him in the standings are Henry Kiel and Michael Ikejiani.  Kiel carded a 78 to open the tournament and is 6-over with 16 holes complete in the second 18.  Ikejiani tallied an 83 to start but has made a nice jump in the second round.  He is just two strokes over with 16 holes in the books in his second round.

Carson Parker is tied for the low score among all individuals.  A consistent day saw him complete both rounds with scores of 76 and 77.  He is tied for the 48th position.  Mason Taylor wrapped up his rounds on Monday with totals of 81 and 83.

Valparaiso holds a 12-shot lead in the team standings.  The Beacons scored a 4-under 284 in the first round and are 1-over in the second 18.  DePaul is in second place while Loyola and Cleveland State are tied for third.  Anthony Delisanti and Caleb VanArragon of Valparaiso are tied for the individual lead and are two in front of their nearest competition.

On Tuesday, those with holes to complete from round two will do so before all teams play the final 18 holes.

Congratulations to our election winners!