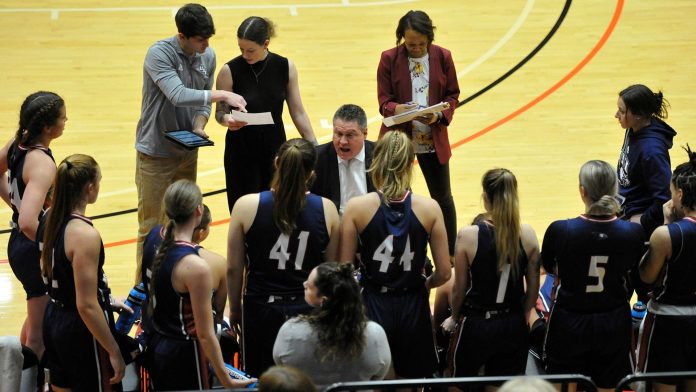 EDWARDSVILLE, Ill. – University of Southern Indiana Women’s Basketball made a big, fourth-quarter charge against Southern Illinois University Edwardsville on Saturday afternoon, but the Screaming Eagles’ push came up a little short as the Cougars held on to win 78-69.

SIUE started off fast in the first 90 seconds of the game with an early 6-0 advantage. Southern Indiana then found its offensive spark to narrow the early deficit under the eight-minute mark of the first quarter. Sophomore guard Vanessa Shafford (Linton, Indiana) drilled back-to-back jumpers, including one from three, to bring USI back within one, 8-7.

At the beginning of the second quarter, the Cougars pushed their lead back up to six. After a pair of made free throws for USI, junior guard Lexie Green (Indianapolis, Indiana) canned a three from the top of the arc to trim the deficit down to one, 22-21. The offenses slowed down over the course of the next few minutes. A layup by senior forward Hannah Haithcock (Washington Courthouse, Ohio) with 3:58 left in the first half put USI ahead, 25-24. Both offenses went back and forth for the remainder of the second period, as SIUE took a three-point lead, 35-32, into halftime.

Out of the break, SIUE came out with extensive pressure and hot shooting to begin the second half. The Cougars went on a 10-0 run over the first 1:38 of the third quarter. Trailing 45-42, the Screaming Eagles responded with consecutive baskets to cut the margin back down to nine, 45-36.

Midway into the third period, graduate forward Ashlynn Brown (Perrysburg, Ohio) made two consecutive baskets inside to bring SIUE’s lead down to five, 47-42. In the last 3:30 of the third quarter, SIUE’s defense and offense clicked, as the Cougars outscored USI 11-3 for the remainder of the third to take a 58-45 lead into the fourth quarter.

SIUE increased its lead at the start of the fourth period, extending the margin up to 18, 63-45. Approaching the halfway point of the fourth, the Screaming Eagles started their pushback, as junior forward Meredith Raley (Haubstadt, Indiana) connected on consecutive layups. Inside the five-minute mark, a layup by Brown was followed by a buried three-pointer from senior guard Tori Handley (Jeffersonville, Indiana) to make the score 65-54 SIUE.

A minute later, Raley cashed in at the foul line and then made a jumper in the next possession to bring USI back within seven, 65-58. Southern Indiana was able to cut the deficit down to five, 65-60, with three minutes left, but SIUE closed out the game from there with a pair of key jumpers and free throws down the stretch.

Southern Indiana was led on the afternoon by Raley with 19 points on 6-14 shooting and 7-8 at the foul line. The junior also pulled down eight rebounds and dished out four assists. Shafford tallied 14 points, going 5-12 from the field, and grabbed six boards. Brown also recorded double figures with 10 points in the game. USI went 22-62 for 35 percent from the floor, including four three-pointers, and 21-25 for 84 percent at the stripe. The Screaming Eagles outrebounded the Cougars 44-37 overall and 17-11 on the offensive glass.

SIUE was led in scoring by sophomore guard Molly Sheehan, who posted 18 points with four made triples. Sophomore guard Sofie Lowis and senior forward Ajulu Thatha each scored 13 points. The Cougars were 26-62 for 42 percent on the day, hitting eight three-pointers, and went 18-21 for 86 percent at the free-throw line.