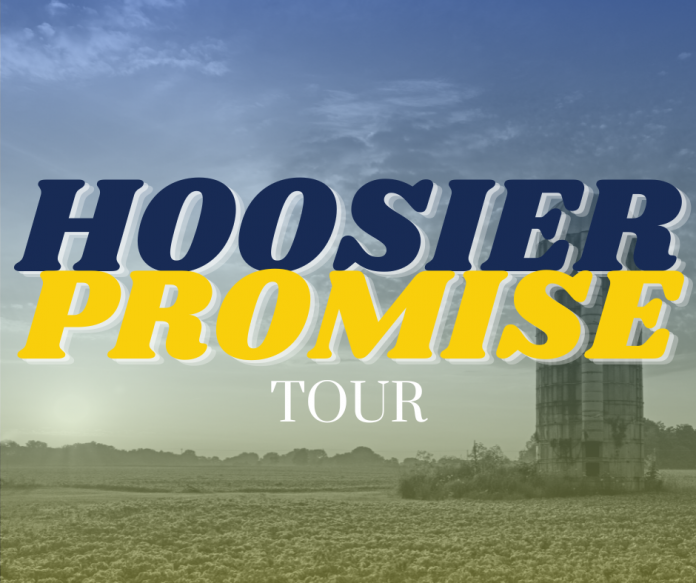 INDIANAPOLIS – On Saturday in Evansville and Columbus, Destiny Wells (Candidate for Secretary of State), ZeNai Brooks (Candidate for State Auditor), Jessica McClellan (Candidate for State Treasurer), and Jason Salstrom (Candidate for Indiana House District 78) will continue the “Hoosier Promise Tour”, a statewide effort by the Indiana Democratic Party and its candidates to highlight the brighter future Democrats will create for the Hoosier State once elected to office on Election Day.

“Indiana has brighter days ahead, and it’s because Democrats are working to solve the kitchen-table issues most important to Hoosier families in all 92 counties. From creating good-paying jobs, expanding broadband, lowering prescription drug costs, repealing the diaper tax, expanding health care for veterans, implementing new gun safety measures, and making the largest investment to fight climate change in our nation’s history, Democrats are delivering a better future for Indiana – and we’re just getting started,” said Mike Schmuhl, Chairman of the Indiana Democratic Party. “Democrats want to restore a woman’s right to choose and protect birth control, eliminate textbook fees for students, repeal the tampon tax, and legalize cannabis. We’re ready to get to work, but it’ll take electing more Democrats up and down the ticket to get this done.”

From securing pandemic relief (via the American Rescue Plan) and providing a once-in-a-generation infrastructure investment (via The Jobs Act) to delivering life-saving health care to Indiana’s veterans (via the PACT Act) and passing measures to help combat global inflation and climate change (via the CHIPS and Science Act and the Inflation Reduction Act), Democrats have been hard at work putting issues important to Hoosiers first, and extreme partisanship second.

As for the Indiana Republican Party, they have made abortion against the law, passed reckless permitless carry, put politics at the center of Indiana’s once-prized education system, and nominated candidates unfit for public office. Under the Indiana GOP, the state is in a rac