Home Political News Commentary: The Long Fuse To The Attack On The Indiana Capitol 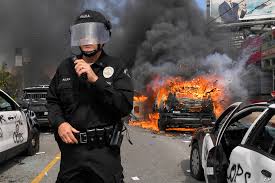 Commentary: The Long Fuse To The Attack On The Indiana Capitol

INDIANAPOLIS—Years ago, I covered a rally that turned into a riot.

It was in the mid-1990s. A motley collection of white supremacist groups from around the Midwest had decided to gather in Indianapolis.

After some legal wrangling, they secured a permit to meet on the west side of the Statehouse. They drew crowds not only of their own faithful, but also of counter protesters.

Tensions rose as one speaker after another trooped up and tried to make himself—they were all angry white guys—heard through a small, antiquated sound system. The two crowds taunted each other.

The gathered white supremacists moved like a snake. As a group, they attacked some photographers before turning to assault anyone who crossed their paths. They swung signs, bags, belts and fists in all directions.

The police restored order in a hurry, but not before many people were left battered and bruised.

Ground we thought was safe—even sacrosanct—had been turned into a battlefield.

A symbol of a free people determined to govern themselves had been soiled with blood and sorrow.

I thought of that long-ago day of riot and ruin when I watched the mayhem at the U.S. Capitol on Jan. 6, a day, to echo FDR, that now will live in infamy. I watched a gang of my fellow citizens—my fellow Americans—lay waste to one of our temples of freedom.

I saw them try to deny the right of a free people to choose their own leaders.

Somehow, they thought they were patriots when they were desecrating an American shrine.

They thought they were the good guys.

They thought they were defending freedom.

They weren’t, of course, but it’s easy to understand how they came to be so mistaken.

The fuse that led to the Jan. 6 explosion has been a long one. It was lit more than two generations ago when ambitious politicians first discovered that the path to victory at the polls could be paved by inveighing against government.

Although Republicans were the most egregious offenders, politicians of both parties argued that government could not do anything right.

That government was evil.

That government was the enemy.

The problem with that argument is that in a self-governing society such as ours, government isn’t something foreign or removed from us. Government is the expression of our will as a community, a state, a nation … a people.

When we wage war on the government or on the outcome of elections, we’re fighting an opponent we cannot possibly beat. We are waging war with ourselves.

It is tempting to blame all of this on Donald Trump, but the reality is that he is the symptom, not the disease—the worst manifestation so far of an ailment that has afflicted us for far too long. The disease is something we fostered and spread ourselves.

At that long-ago rally that became a riot, I was struck by how much the rhetoric of the speakers resembled that of mainstream political leaders. Their language was less polished and their manner more strident than a president’s or a governor’s or a senator’s, but their message was similar.

Their will, their needs, their grievances always should take priority—and any law or government body that asked them to compromise or consider another point of view was an instrument of oppression.

This road took us to the horrors of Jan. 6. If we continue to follow it, it will lead to places that are even worse.

In the hours that followed the assault on the Capitol, I found myself thinking of the words of a great American, my late friend U.S. Rep. Andy Jacobs Jr.

Andy once told me it pained him to hear political candidates say they would “fight” for an issue, a concern or a constituency. He said he didn’t like thinking of people who disagreed with him as adversaries—or even enemies—when they really were his neighbors and fellow citizens.

It was a good question then.

And an even better, more important one these days.