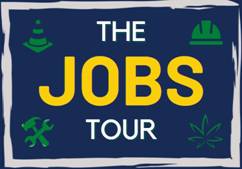 (From the state’s READI program to infrastructure projects across Indiana, the American Rescue Plan and The Jobs Act delivers for Indiana)

WHAT: INDems’ “The Jobs Tour” Stop

“Indiana and Hoosier’s families have a bright future, and it’s primarily because of President Biden and Indiana Democrats like André Carson and Frank Mrvan. Democrats delivered on jobs, the state’s READI program, construction projects, and transformational infrastructure projects voters will see for years to come,” said Mike Schmuhl, Chairman of the Indiana Democratic Party. “The American Rescue Plan and the Infrastructure Investment and Jobs Act made all of this possible, and while Indiana Republicans focus on their culture wars at the statehouse, Democrats will crisscross the state to share this great news directly with voters. Indiana is on the cusp of a better tomorrow, and it’s because Democrats are getting things done and supporting Hoosiers when it matters most.”

Democrats created this bright economic future for Hoosier families, and “The Jobs Tour” will celebrate how these kitchen table issues were made possible when it mattered most.