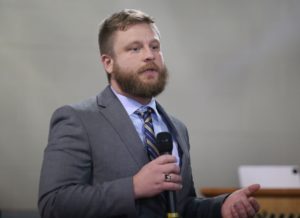 JAMES SCENIAK’S STATEMENT ON THE SUPREME COURT’S DECISION IN “DOBBS v. JACKSON”
JUNE 26, 2022
First, I recognize that this decision will split communities, neighbors, friends, and families, dividing us and fueling a strong disconnect among those who we could otherwise call friends. The court’s decision allows the issue of abortion to now go to your elected officials, forcing them to uphold promises that they never intended to keep.
Both sides used hyperbole to cause emotional reactions to manipulate votes. Now, they will be held accountable for how they ran on this issue. With the following words, I intend to show how I will focus on solutions that should have originally been legislated instead of a court misusing its power to legislate from the bench.
Despite which side of the issue you fall on, Roe V. Wade was a poor decision. The courts overstepped and used the bench to legislate an issue into law that should have been the responsibility of elected officials. As I have been on the campaign trail, I have pointed out that both sides have had opportunities to address abortion and women’s health and yet have failed to do so. In fact, both sides have held supermajorities four times since Roe v. Wade was decided. The Democrats failed to secure women’s rights issues and the Republicans failed to define life. Running on emotional language is far easier to manipulate votes than actually intending to find solutions where they can be held accountable by you.
As a candidate who strongly believes in supporting life, while simultaneously believing that medical decisions remain between physicians and individuals, there are many issues we need to address within any laws that will be written on the federal level. As complex as this issue is, we can begin by looking for actual solutions.
Defining life: As scientific consensus has not been reached as to when exactly human life begins, the government should err on the side of protecting life. An example would be “fetal homicide laws” that consider malicious harm by another individual that results in the termination of a pregnancy as a crime.
End-of-life decisions: When we define the life we then need to consider the medical end-of-life decisions. End-of-life decisions are made by a family who has a great investment and consequences in that decision. There are many medical decisions that can only be made by a relative with the guidance of their physician. Government should be exceedingly cautious when interfering with these decisions. End-of-life medical decisions by a woman who is pregnant should be between her and her trusted physician.
Penalty under the law: Under the law, if we make something illegal or ban it, there must be penalties, or the law is meaningless. Currently, we as a nation place more individuals in jail and prison than any other nation. Pro-life politicians who seek to make all abortion illegal need to answer what penalties they will propose.
Miscarriage: Will women who have miscarriages be dehumanized? Miscarriages are common medical issues. When we rule with an Iron fist, the government becomes invasive, even to those who are innocent. Currently, HIPAA protects medical privacy. Ensuring HIPAA covers women’s medical decisions, even from the government itself, is essential
Rape: With medical care, rape victims should be offered Plan B, in which they can prevent fertilization of the egg. Understandably, this only helps those who immediately seek medical and legal intervention, but it is still important. It is also important that we encourage those in rape situations to immediately come forward so they can get the compassionate medical care they need.
There are hundreds of issues within abortion laws and women’s medical rights that will now be required for lawmakers to address. Every one of these issues should be addressed with compassion, empathy, and an understanding the government should be wary when interfering with women’s medical decisions.
I certainly consider myself socially pro-life and I have been asked multiple times to define what this means. To put it bluntly, I do not care for the “industry of abortion.” In our nation, we have treated abortion differently than other medical procedures. Abortion clinics removed the humanity of a sensitive medical end-of-life decision by creating an abortion industry.
Instead of consulting with personal care physicians who have developed a professional relationship with us by caring for our medical needs, we have utilized an “industry line” that does little to follow up with a woman’s care after an abortion.
I want to reduce the number of abortions by addressing social and economic concerns. Why reduce abortion? Ultimately, abortion is an invasive procedure and an end-of-life decision that has both emotional and physical side effects. Any medical procedure, despite safe medical practices, can result in very real consequences for a patient. If we can socially reduce abortions we will have a far greater impact on preserving life than any law will address.
Banning and criminalizing, in reality, simply does not work. In this case, it will have little impact on saving lives. Abortions will still be performed and often with even greater risk, thus losing more lives. Our end goal should always be to preserve life to the best of our ability. This can only be done by increasing society’s support for life.

My plan on reducing abortions in America:

Supporting adoption: Personally, I have witnessed the great miracle of adoption. Two of my siblings are adopted. As a nation, we need to support adoptive families which include substantial tax breaks and subsidizing the cost of adoption.

Ensuring economic opportunity for all: Abortions have increased numbers in communities that have economic strife. We need to ensure that every individual has the opportunity and freedom to pursue happiness and meaningful life. We do this by ensuring that good economic practices are the standard in Washington, including fighting inflation, and waste, and reduction of taxes that have become burdensome for American families

Our politicians employ emotional issues to divide us so we will, in return, increase the power of the governing body. If you are angry at the injustice of how our government has handled this situation, then good, you want to change.

We should direct that anger to a system that has failed both women and the preservation of life by using meaningless rhetoric to divide us instead of solutions that bring significant culture change and encourage grace, preservation of life, and humanity in our society.

FOOTNOTE: James Sceniak is the Libertarian Party of Indiana’s candidate for the United States Senate. A native of Goshen, he currently resides in Greenwood, where he is a behavioral therapist. To find out more, visit SceniakForSenate.com.