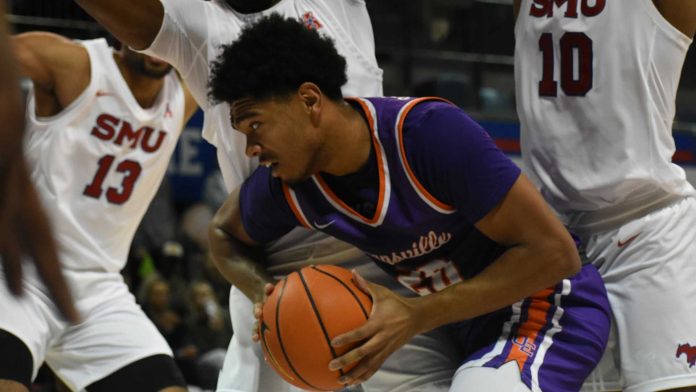 EVANSVILLE, Ind. – In the second match-up in a home-and-home series, the University of Evansville men’s basketball team travels to Orlando, Fla. to face the University of Central Florida on Wednesday evening.  Tip is set for 6 p.m. CT inside Addition Financial Arena with the Purple Aces Sports Network and ESPN+ having the coverage.
Last Time Out
– A low scoring contest saw SMU hang on for a 55-47 win in Dallas on Saturday
– Evansville led by a 21-17 score at the break before the Mustangs opened the second half on a 13-0 run to take the lead for the duration of the contest
– Following the run by SMU, Evansville cut the gap to as few as one point with three minutes remaining before the Mustangs took control at the end
– Blaise Beauchamp scored a season-high 16 points while draining four 3-pointers in the contest
– Yacine Toumi added 11 points and 10 boards for his second double-double in the last three games

What an Improvement
– Offensive rebounding is one thing that been an emphasis for the Purple Aces this season and the work has paid off
– With an average of 12.0 offensive caroms per contest, Evansville leads the MVC and is 109th in the country
– That is a start turnaround from last season when the Aces averaged just 4.77 offensive boards to rank 350th nationally and at the bottom of the Valley

Scorching the Nets
– Hitting four 3-pointers, Blaise Beauchamp scored a season-high 16 points at SMU
– Through the opening three games, Beauchamp hit just three triples before eclipsing that total against the Mustangs
– He played a season-high 33:42 in the contest in Dallas

Double-Double Take Two
– Two of the last three games have seen Yacine Toumi record a double-double
– Last time out, he recorded 11 points and 10 boards against SMU while his first double-double came at Saint Louis where he tallied 14 points and 10 caroms
– For the season, Toumi is tied for 5th in the MVC with 7.5 rebounds per contest while his 13.25 points ranks 19th

Scouting the Opponent
– Following a season-opening loss to UNC Asheville in double overtime, UCF has recorded four wins in a row
– After defeating Florida State and Western Illinois, the Knights defeated Oklahoma State and Santa Clara to win the Baha Mar Hoops Bahamas Championship
– Taylor Hendricks leads UCF in both scoring and rebounding
– He checks in with an average of 15.8 points per game while totaling 7.2 rebounds per contest
– A 51.7% shooter, Hendricks has hit 41.7% of his triples
– C.J. Kelly is averaging 13.2 points and has converted 90% of his free throw tries