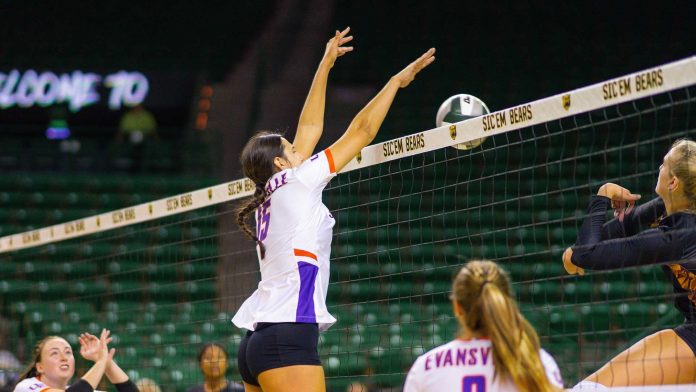 EAST LANSING, Mich. – Saturday’s final day of the Green & White Classic saw the University of Evansville volleyball team drop a hard-fought 5-set match over Oakland before putting up a fight against Michigan State in the finale.

Sophomore Giulia Cardona recorded 22 kills while Madisyn Steele and Alondra Vazquez added 15 and 12, respectively, in a 5-set contest against Oakland.  Steele hit .387 while setting her career mark with the 15 kills.  Kora Ruff had 45 assists while Cardona led the way with 17 digs.  Steele and Cardona added two block assists apiece

Both squads battled back and forth in the opening moments before Giulia Cardona recorded three service aces in a row to cap off a 5-0 run that turned a 6-6 tie into an 11-6 lead.  Oakland worked its way back, cutting the deficit to just two points at 20-18.

Madisyn Steele recorded a kill to push the lead back to three and her point swung the momentum back in the Aces favor as they picked up a 25-20 win.

Oakland took control early in the second set, jumping out to a 9-2 lead.  The Grizzlies lead reached double digits for the first time at 17-7 and the Aces were unable to overcome the deficit with Oakland knotting the match with a 25-15 decision.

Early in the set, Alondra Vazquez registered a kill that knotted things up at 7-7.  Three points in a row by Oakland turned into a larger run as they scored 10 of the next 12 points to go up 17-9.  Trailing by an 18-10 score, the Purple Aces refused to give up.  The defense forced three consecutive errors while Steele posted a pair of kills to cut the deficit to three – 19-16.  Cardona capped it off with another ace to close the gap.

Just when UE looked to make its way back, the Grizzlies countered with three in a row before taking a 25-18 win to earn a 2-1 match lead.

Another quick start by Oakland gave them a 4-1 advantage before Evansville rallied to tie it up for the first time at 6-6.  With the score knotted at 10-10, UE scored three in a row to take their largest edge of the frame.  OU stormed back to tie it at 14-14, but UE countered with a 4-0 stretch that included an ace from Laura Ruiz.

UE continued to hold the lead, going up 23-20, but things were far from over.  Oakland fought back once again with three in a row to tie it up.  As the set moved to extra points, UE never let Oakland take a lead and the work would pay off in the form of a 27-25 win to force a decisive fifth set.

Set 5 – OU 17, UE 15It was another close game in the fifth.  Oakland took multiple leads, but the Aces answered each time.  The largest edge for OU came when they matched their 3-point lead at 14-11.  Down to its final point, the Aces rallied.  Two kills from Steele, combined with a Ruiz service ace tied it up.

Vazquez added a kill that gave Evansville match point at 15-14, but the Grizzlies had the final answer, scoring the final three points to clinch the win.

Evansville got into an early hole in the opening frame with the Spartans scoring the first four points before going up 10-2.  MSU made it a 10-point game at 16-6 before taking it largest lead at 21-10.

The Aces chipped away at the deficit with Hannah Watkins coming up big down the stretch.  Three consecutive kills helped UE get within five at 24-19 before the Spartans scored the decisive point to take game one.

A much better start for UE saw them go up 5-3 with Cardona picking up an early kill.  Michigan State came back to jump in front at 8-7 before the teams swapped the lead multiple times before UE turned an 11-11 tie into a 13-11 lead.

After Michigan State took an 8-3 lead to open the set, Evansville stormed back with five in a row to tie it up.  Maddie Hawkins had an ace while Madisyn Steele picked up a kill.  As fast as UE came back, the Spartans had an answer of their own.  Following a Kora Ruff kill that made it a 10-9 game in favor of MSU, the Spartans hit on all cylinders, scoring the next 13 points before winning by a 25-13 final.