State budget officials project Indiana will have a $1 billion hole in its budget by the end of the current fiscal year, even with the state’s significant financial reserves. They’ve repeatedly asked for federal help, including by loosening restrictions on existing federal CARES Act funding.

That’s in part why the state still hasn’t spent more than half of that money – although that’s not what Braun thinks.

“I think we’re sitting on all the money that was given to us by the federal government because we have not had to use it,” Braun said. 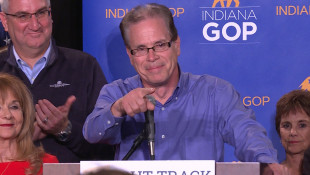 Braun was asked directly why he doesn’t support the kind of help Gov. Eric Holcomb and state officials have requested.

“We will make it through it based upon how we’ve lived our life in a responsible way, as a state government,” Braun said.

The governor has already cut higher education funding and asked state agencies to slash their budgets by 15 percent.

TAGS:  MIKE BRAUNINDIANA BUDGETCARES ACTCORONAVIRUSCOVID-19TAX REVENUE
At WFYI, our goal is to cover stories that matter to you. Our reporting is rooted in facts. It considers all perspectives and is available to everyone. We don’t have paywalls, but we do need support. So if unbiased, trusted journalism is important to you, please join us. Donate now.

AGENDA Of Vanderburgh County Board of Commissioners