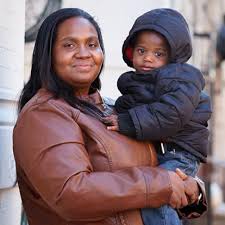 by Staff of the City-County Observer

As a fatherless child of color is born in a “Privileged Town”  his mother does everything to protect him from the obvious hurt, pain, and despair that awaits him at days dawn. With little food, money, or a defined plan to improve their station in life each day she begins the most difficult journey for a better life. Years of heartbreak and despair buffered by substandard subsidized public housing, food stamps, and governmental healthcare from a failing health system she conquers each day with the grace of God and the determination of a saint.

The mother of the child of color begins her day’s journey to catch an early morning bus to earn a nonsustainable wage. She continued to find a way to provide her child of color with the love and protection of a saint taught by her biblical upbringing. With the burden of a broken marriage and a lost child during birth, she continues her daily chores with the songs of ‘Sing And Praise’ dancing in her head throughout the day.

Years of receiving Governmental sponsored food stamps, dry milk, less than nourishing processed cheese, a yearly trip to the County Health Department for yearly check-ups and shots, and a Salivation Army Holiday feast and care packages became a way of life has taken a toll on her emotional and physiological well being. She too had the same dream that Martin Luther King had and instilled it in her son of color.

In a rat, drug and crime-infested jungle greet a struggling soul every morning. Without a nourishing breakfast, her son of color put on his mixed matched soiled clothes and he journeys on foot in all kinds of weather to ill-equipped school to seek the truth.  At school, his classmates practice one-upmanship and flaunt their trophies of privileged to anyone who listens or cared. He focuses on the real prize that one-day he would become an acceptable member of “Privileged Town.”  At school, he negotiates a landmine of corruption and lawlessness while he burdened to seek the truth of the world on an empty stomach. His heroes were few. A mentor is unachievable. With the spirit of the heart of a lion, biblical teachings, and the wings of an Eagle, he continually looks to the mountains for his flight towards the sun.

It’s an unwritten rule that the only way to survive the ghetto is to leave.  With years of disappointment, pain, hurt, and despair the child of color begins the journey to becoming an acceptable member of a “Privileged Town”.  He understands that his journey shall be long and challenging but with God’s guidance his goal is achievable because adversity has brought him strength.

Another “Privileged Town’ greets the fatherless child of color with less than opened arms. The child of color takes on a not so obvious foe of racial discrimination. With the confidence of a warrior going into battle, failure isn’t an option. With his soul intact and prayerful resolve, he struggles forward to improve his station in life in the same way that he excelled academically and athletically.

The person of color now has a sustainable job and living in a nice area of “Privileged Town” with his mother and a wife and two kids.

The self-serving career politicians and the bureaucratic pimps of the poor need to step aside so the voiceless can be heard by the sincere and compassionate advocates of the downtrodden.  it’s with a prayerful resolve that the compassionate advocates of the downtrodden will convince the career politicians and bureaucratic pimps of the poor to include them in creating government programs that will stop offering the disadvantaged governmental handouts but instead programs that provide them with a helping hand.

We get a kick out of career politicians when they talk with the masses about race issues and political, social, economic, judicial, and police injustices.  Its time for elected officials, law enforcement officials, judges, civil rights activists, legislative bodies, community leaders, citizens, and clergy to sit down and have an open and pointed discussion on how to begin the long and challenging task on how to end the race, political, social, economic injustices while addressing judicial and law enforcement reforms?

FOOTNOTES: Racism and discrimination are alive and well in America. Now its time that the area clergy, advocates of the poor, business leaders, and ordinary citizens ban together and take on racism, poverty, blight, and discrimination head-on with fearless abandon.