Rokita said he entered the race because Hill had a history of “bad judgment, bad choices and not taking responsibilities” marring his time as state government’s top lawyer. Rokita, who is known as a contentious conservative, is looking to make a political comeback after running unsuccessfully for governor in 2016 and a U.S. Senate seat two years ago.Hill had been seen as a rising African American star among Republicans and worked to build support among social conservatives, touting himself as an anti-abortion and tough-on-crime crusader and making appearances on Fox News to discuss topics such as San Francisco’s troubles with homelessness.But Hill faced opposition from Republican Gov. Eric Holcomb and other top state GOP leaders. Holcomb called on Hill to resign over the allegations that he drunkenly groped a state lawmaker and three other women during March 2018 party marking the end of that year’s legislative session.Hill, 59, has denied wrongdoing, and a special prosecutor declined to file criminal charges against him. But the state Supreme Court suspended his law license for 30 days, ruling unanimously in May that the state’s attorney disciplinary commission “proved by clear and convincing evidence that (Hill) committed the criminal act of battery.”Former Evansville Mayor Jonathan Weinzapfel won the Democratic nomination a race that the party is targeting in hopes of breaking the current hold Republicans have on all statewide elected offices.Weinzapfel has criticized the GOP candidates for supporting Hill’s participation with other Republican attorneys general in the lawsuit against “Obamacare,” but Rokita’s nomination likely lessens the potential campaign impact of the groping allegations.Democratic Rep. Mara Candelaria Reardon testified during an October attorney disciplinary hearing that Hill, smelling of alcohol and with glassy eyes, was holding a drink in his right hand and put his left hand on her shoulder, then slid his hand down her dress to clench her buttocks. “A squeeze, a firm grasp,” she said.Three female legislative staffers — ages 23 to 26 at the time — testified that Hill inappropriately touched their backs or buttocks and made unwelcome sexual comments during the party.

Rokita won statewide elections as Indiana secretary of state in 2002 and 2006 before he held a central Indiana congressional seat for eight years through 2018. He champions his “solid history” of defending gun rights and religious freedom, as well as his previous work while secretary of state to implement the nation’s first photo voter identification law.

Rokita has faced several controversies, including allegations that his congressional staffers often felt obligated to do political work to help his campaigns. And a 2018 Associated Press analysis of state and congressional spending records revealed that Rokita had spent more than $3 million in public money on ad campaigns that often coincided with his bids for office. 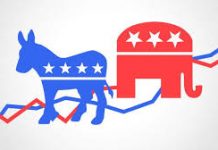