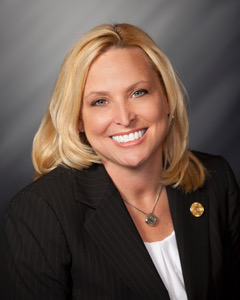 According to the National Human Trafficking Hotline, sex trafficking often occurs at truck stops and is commonly advertised online or through citizens band radio, typically by using codes or signals. That’s why McNamara, chair of the House Courts and Criminal Code Committee, said she authored a proposal for a new law that would ensure new truck drivers are trained on how to recognize, report and prevent human trafficking.

“Truck drivers are truly the eyes and ears of this country, and can spot these crimes, especially in places like rest areas and truck stops, better than any other group,” McNamara said. “By training them to recognize the signs of these crimes, drivers can be one of the first to help victims and report perpetrators.”

McNamara said drivers can encounter criminal activity at rest areas and truck stops due to their remote locations and access to major roads. The National Human Trafficking Hotline reports that in the last five years over 41% of the cases truckers have reported to them involve victims that are minors. McNamara said young runaways and homeless youth are particularly at risk to be sexually exploited.

Under the bill, Hoosiers pursuing their commercial driver’s license would be trained on how to identify and report human trafficking. McNamara said this heinous crime involves the exploitation of someone for the purpose of compelled labor or a commercial sex act through the use of force, fraud or coercion.

McNamara said there are often red flags that can help identify a potential victim, like if the person has no or very little personal possessions, no identifying documents like a driver’s license, and their communication is restricted or controlled. To report a suspected underage human trafficking victim, contact the Indiana Department of Child Services at 1-800-800-5556 or the National Human Trafficking Hotline at 1-888-373-7888. While it is advised to never approach a trafficker, if able to approach a potential victim, ask if they need help. If they respond yes, immediately call police.

McNamara’s House Bill 1196 is assigned to the House Roads and Transportation Committee for consideration and is scheduled to be heard Tuesday, Jan 17. McNamara worked with the National Truckers Association and the Indiana Motor Truck Associations to If passed, Indiana would join 12 other states with similar laws, including Ohio, Wisconsin and Illinois.