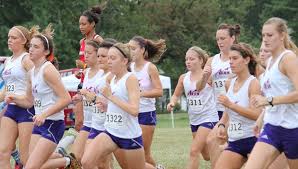 Picking up where she left off last season, Anna Lowry posted a sub five-minute mile (4:58.87) improving her own school record, while winning the event by over 15 seconds.

Taiza Alexander bested her own program record in the long jump, finishing with a mark of 5.38m (17’8”) to earn third place in the event.

Also taking down her own school record was Brittany Corley in the women’s weight throw. Corley tossed a 12.58m (41’3.25”) mark to finish in seventh place.

Joshua Myers and JJ Pederson finished in fifth and sixth place respectively in the mile run, with Myers finishing in 4:33.23 and Pederson setting a personal best at 4:33.75.

Ian Alberts captured third place in the men’s pole vault with a final mark of 4.35m.

The Aces next scheduled indoor track and field event is the MVC Championships hosted by Northern Iowa on February 27-28.

No. 24 Eagles Soar Above No. 1 Flyers, Earn 3rd Seed in GLVC Tournament