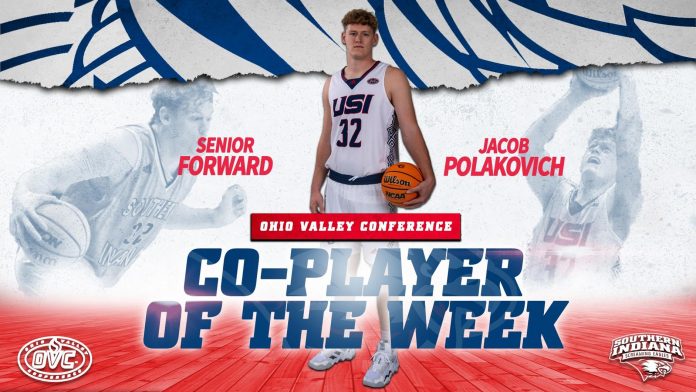 EVANSVILLE, Ind. – University of Southern Indiana senior forward Jacob Polakovich (Grand Rapids, Michigan) was named co-Ohio Valley Conference Player of the Week for his efforts the Screaming Eagles games versus Lindenwood University and Southern Illinois University Edwardsville last week. The OVC honor is the second for Polakovich and the fourth this season for the Eagles as a program.

Polakovich started the week by overpowering Lindenwood in the lane, grabbing 12 rebounds and posting nine points in the 81-65 road victory. The senior reached double-digits in rebounding for the 11th time this season by swiping four offensive and eight defensive boards off the glass, while scoring the nine points on four-of-seven from the field and one-of-one at the line.

The senior forward finished the week with a 16-point, 23-rebound performance in the 82-72 victory over SIUE. The double-double was his eighth of the season and his 12th double-digit rebound game. The 23-rebound contest was his third game of 20-or-more rebounds this season and ties for fourth among individual performances this season among Division I players.

Polakovich, who scored all of his 16 points in the second half of the SIUE game, was six-of-15 from the field and four-of-seven from the line, while grabbing eight offensive and 15 defensive boards.

Polakovich and the Eagles resume OVC action Thursday when they host Eastern Illinois University at Screaming Eagles Arena. The game is slated for a 7:30 p.m. tip, streaming on ESPN+ and airing on ESPN 97.7FM and 95.7FM The Spin.