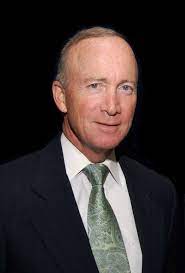 Nearly 20 years ago, a corps of Indiana Republicans waged a prolonged campaign to draft Daniels to run for Indiana governor. They staged events and formulated petitions designed to persuade him to seek office.

It was a desperate time for the Indiana Republican Party. Democrats had controlled the governor’s office for four straight election cycles and only one of the races had been somewhat close.

The GOP needed someone to turn things around.

Daniels—“My Man Mitch,” as the t-shirts and the posters said—seemed to be the guy who could do it.

Daniels played coy for quite some time.

Back then, many observers wrote off his will-I-or-won’t-I Hamlet-in-the-heartland performance to concerns about leaving the lucrative fields of the private sector for a prolonged period and perhaps opening a door to his private life, specifically his marriage. (He and his wife, Cheri, had married, divorced and then remarried.)

Maybe Daniels did think about those things, but he might have played hard to get them regardless.

The fact is that it proved to be an effective political and leadership strategy.

There were a lot of potential Republican candidates for governor in 2004. As long as Daniels refused to say whether he was in or out, he froze a great deal of the fundraising for his rivals.

That’s because the donor class in the GOP wanted Daniels. They weren’t going to commit to anyone until he signaled his intentions.

That left the power center of the Republican Party in a position of beseeching a potential candidate to run, rather than having the candidate beg for support.

That strengthened Daniels’ hand with the party when he did run. Because he seemed to be answering a call for leadership, he could argue that the Republican Party had asked him to take charge and that others should fall into line.

During his eight years as governor, Daniels managed to exert an influence and even control over legislators from his own party in a manner rarely seen in Indiana politics. As a result, he was able to push through an agenda as ambitious as that of any governor in the state’s history. For good or ill, he remodeled the way government did business, altered the structure of Indiana’s schools and educational administration, and made this state a laboratory for conservative, market-driven governance.

Now, two decades after his flirtation with running for statewide office, Daniels is batting his eyes again.

He spent a decade as Purdue University’s president. He became perhaps the most famous college leader in America and made old-school Republicans long for him to run for office again.

Now that he’s stepped down at Purdue, establishment Republicans not happy with the direction their party has taken in the days of Donald Trump see Daniels, once again, as the guy who could turn things around.

They want him to run in 2024 either for governor again or for the U.S. Senate.

Daniels has said he won’t do a “rerun” and seek the governor’s office again. But he said he was thinking about a Senate campaign.

That’s enough to get the “draft Mitch” machinery in operation once more.

Will the routine work again?

The Republican Party is vastly different from what it was two decades ago. Back then, the party was hungry for victory and eager to be brought together.

Now, the GOP controls every statewide office in Indiana and has supermajorities in both chambers of the Indiana General Assembly. The party is far less likely to look for someone, even Daniels, to serve as its savior.

And the divisions within the Republican Party are deeper now. Many of the Republican officeholders inspired by Trump are more eager to fight with old-school members of their own party than they are with Democrats.

It’s unlikely the field will clear for Daniels this time, regardless of how charmingly coy he is. If he wants the nomination—and, more importantly, if he wants to restore his party to sanity—he’ll have to fight for it.

This time around, he’ll have to do the courting.

Not the other way around

FOOTNOTE: John Krull is director of Franklin College’s Pulliam School of Journalism and publisher of TheStatehouseFile.com, a news website powered by Franklin College journalism students. The views expressed are those of the author only and should not be attributed to Franklin College.