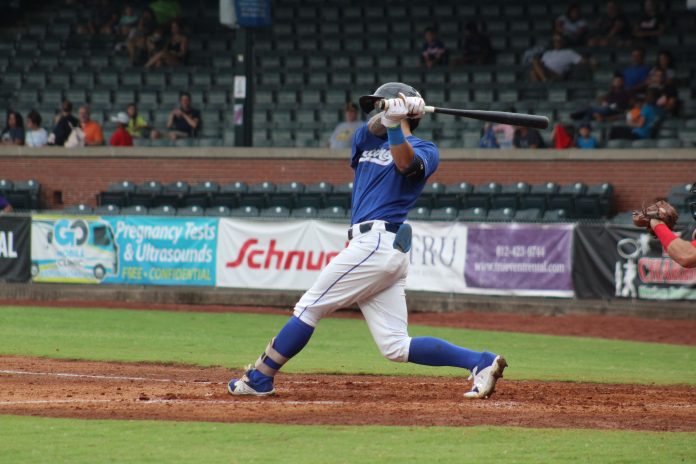 EVANSVILLE, Ind. – The Evansville Otters allowed eight runs in the final three innings as the Tri-City ValleyCats ran away with a 10-4 win Sunday evening.

Starters Olbis Parra and Ryan O’Reilly settled into the game well – as the game remained scoreless into the fourth inning.

In the top of the fourth, Tri-City linked a pair of hits together, Jesus Lujano bringing in the game’s first run with an RBI double.

Directly after, Joey Campagna brought in a second run with a sacrifice fly RBI.

Evansville responded with a run of their own in the fifth as Miles Gordon singled in Jacob Bisharat.

The ValleyCats 2-1 lead was carried into the seventh as Tri-City began to run away.

In the seventh, the power of Tri-City returned as Joey Campagna and Carson McCusker hit a two-run home run and a solo home run, respectively.

Evansville managed a singular run in the seventh when Gordon drove in his second of the night, this time on a fielder-choice groundout.

In the eighth, the ‘Cats struck once again, capitalizing on a Brad Zunica sacrifice fly RBI.

The Otters brought themselves within two with a strong bottom of the eighth. Steven Sensley kicked off the inning with a solo home run before Andy Armstrong brought in a final run with an RBI single.

The Otters managed one runner in the ninth, but strikeouts ended the threat abruptly as Tri-City closed out the win, 10-4.

The win was awarded to Olbis Parra, his third of 2022. O’Reilly received the loss, giving up five runs on seven hits in his seven innings of work.

Though no Otters had multi-hit days, Gordan recorded two RBIs, his team-leading 11th multi-RBI game of 2022.

Evansville returns to divisional play this week as they head to Avon, Ohio to take on the Lake Erie Crushers. First pitch on Tuesday is scheduled for 7:05 p.m. Audio-only coverage begins on the Evansville Otters YouTube page at 6:50 p.m.