Evansville Courier columnist Joe Aaron was the guest of honor at a “roast” held at Das Kollker Haus restaurant on April 24, 1977.

The event was sponsored by The Society of Professional Journalists. Aaron is seated next to his wife (left) as Jeanne Suhrheinrich, Courier entertainment editor, speaks at the microphone.

Aaron’s “Morning Assignment” column, which first appeared in 1957, was noted for its warmth and humor, making it a favorite with readers. In 1962, he won a national award for the “best local interest column,” and his articles continue to be reprinted in the Courier and Press.

Aaron died soon after collapsing in the newsroom in 1986. 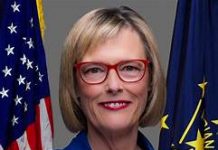 Mother Arrested for Neglect after Drugs found during Traffic Stop