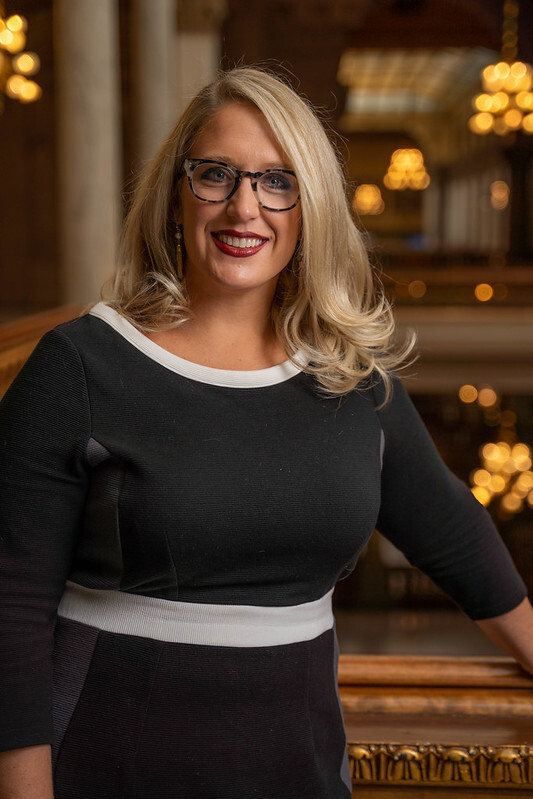 INDIANAPOLIS — When Superintendent of Public Instruction Jennifer McCormick’s term was up as the final elected official in the role, Gov. Eric Holcomb went with an obvious choice when replacing her: his senior education advisor, Katie Jenner.

In college, Jenner studied business and education. She went on to receive a doctor of education from the University of Kentucky and a MBA from Indiana State University.

She began her career at a Kentucky high school near Cincinnati, where she taught career and technical education with a focus on business for four years. She went on to spend nearly 10 years in different roles at Madison Consolidated Schools in southern Indiana. She served as a school administrator, senior director of learning and title programs, and assistant superintendent.

From November 2018 to August 2019, she worked at Ivy Tech Community College as vice president of K-12 initiatives and state partnerships. Jenner advised Holcomb for a year and five months prior to the announcement.

Now she will be the state’s first appointed secretary of education, but her appointment isn’t without controversy.

The bill asking the state’s top education office to become an appointed one in 2021 passed in 2019 as one of Holcomb’s legislative priorities. Republican McCormick, education secretary at the time, was frequently under fire by fellow Republicans for supporting Democratic candidates.

Jenner’s resume would seem to make her a good fit to create programs to further Holcomb’s continuous goal of expanding workforce development in the state.

In the new role, Jenner will serve as chief executive officer of the Indiana Department of Education and serve on the State Board of Education. Previously, the superintendent has served as the chair of the board, but it is no longer required.

However, Sally Sloan, president of the American Federation of Teachers of Indiana, said while she’s glad the governor chose a candidate with a background in education, her group opposed the change to an appointed secretary of education because it could make the role more politically motivated and Republican-bent.

“I mean, I’m afraid of that. I don’t know what we’re going to see,” Sloan said. “I hope there is some transparency and opportunity to be able to engage and have an influence in what’s going to work for public school children. That’s our concern.”

For the 2021 legislative session, AFT Indiana wants a restoration of collective bargaining, teacher evaluations separated from test scores, a raise in teacher salaries, and an increase in resources available to children dealing with family and social issues.

Independent educators took to Facebook to voice their opinions on Jenner’s appointment, with many criticizing the change of the position from elected to appointed.

“Absolutely ridiculous that this is now an appointed position,” said Jori Zollman, an elementary teacher at Mooresville Consolidated Schools. “The Republican Party controls the entire state. There is no balance, and the Republican Party has slowly defunded and devalued public education over the last decade.”

Anthony Ioannacci, a Michigan City teacher, commented with concerns about Jenner’s four years of experience in the classroom.

“If you have only had four years teaching experience, you have no idea the needs of today’s students and certainly have little idea of why Indiana is about to see a mass exodus of teachers,” Ioannacci wrote on Facebook. “If I evaluated my students with one observation a year as I am currently evaluated now, I would be considered a terrible teacher. Evaluation process needs overhauling, graded schools need to go and local associations should have the right to bargain hours.”

The governor’s office declined a request for an interview with Jenner from TheStatehouseFile.com, saying she has not yet started the position.

Holcomb applauded Jenner in a press release on the day of the announcement.

“Dr. Katie Jenner has focused her entire career on investing in students, teachers and staff, and she will continue to build the relationships needed to move our state forward in constructive ways,” Holcomb said.

Jenner recently served as part of Holcomb’s Teacher Compensation Commission, which releaseda 183-page report on Dec. 14 outlining a $600 million plan that could increase Indiana teacher salaries to $60,000 a year. A large burden is put on school corporations to cut costs and find new sources of revenue, with the report asking schools to have referendums to increase local taxes and put them toward teacher pay.

Holcomb committed to reviewing these recommendations and working to increase teacher pay when he shared his legislative agenda on Dec. 17.

Jenner will begin in the new role on Jan. 11.