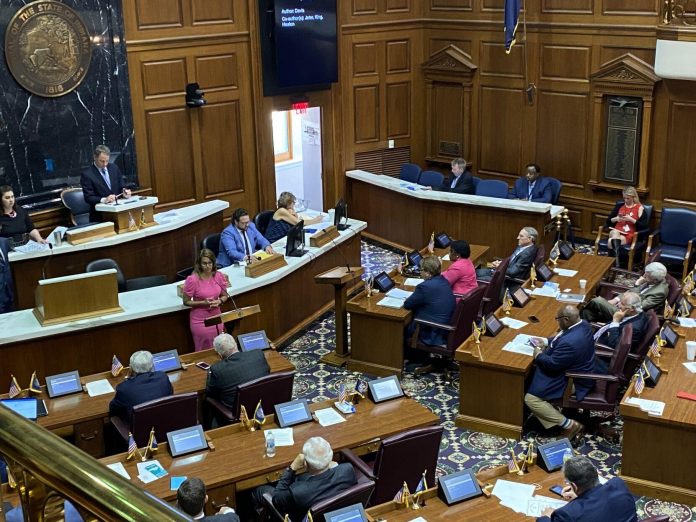 The American Civil Liberties Union Of Indiana Quickly Responded By Announcing It Filed A Lawsuit Shortly After The Vote
MAY 26, 2022
Update Article Was Written By Jack Sells, TheStatehouseFile.com
INDIANAPOLIS—Two months after Gov. Eric Holcomb vetoed House Enrolled Act 1041, which would only allow participation in school sports based on biological sex, the Indiana General Assembly voted to override the veto.
The Indiana House of Representatives voted 67-28 on Tuesday when it convened for technical corrections day, while the Indiana Senate voted 32-15. They only needed a simple majority to overturn the veto.
“Today’s action only strengthens the promise of Title IX, which has had the most profound impact on ensuring women have equal opportunity in sports for nearly 50 years,” House Speaker Todd Huston, R-Fishers, said. “It’s important for Indiana to not only recognize the contributions and achievements made by female athletes but to also ensure those opportunities are secured now and in the future.”
The American Civil Liberties Union of Indiana quickly responded, announcing it filed a lawsuit shortly after the vote.
“The lawsuit was filed on behalf of A.M., a 10-year-old girl who plays on her school’s all-girls softball team. The new law, which would go into effect July 1, 2022, would deny A.M. the right to rejoin her team because she is a transgender girl,” the group said in a press release.  Even with this new case, there is not a large number of transgender athletes in the state, which partially guided Holcomb in his decision, he said.  “The presumption of the policy laid out in HEA 1041 is that there is an existing problem in K-12 sports in Indiana that requires further state government intervention,” Holcomb wrote in his explanation of the veto. “It implies that the goals of consistency and fairness in competitive female sports are not currently being met. After a thorough review, I find no evidence to support either claim even if I support the overall goal.”

Holcomb also pointed to the Indiana High School Athletic Association’s policy as proof that the legislation is unneeded.

The policy looks at cases on an individual basis, and IHSAA commissioner Paul Neidig said he only knows of two applications in the past 10 years. One was regarding a student who was transitioning to male and was allowed to compete on a male cross-country team. The other applicant, who was transitioning to female, decided against continuing to pursue the issue.

In both sessions, the governor’s veto was read aloud. Where they diverged was in what followed. While there was no debate in the House, the Senate spent over an hour talking about the bill.

Sen. Stacey Donato, R-Logansport, presented the bill and said it was important no matter if there were only one case. She also mentioned other states that have passed similar legislation.

Sen. J.D. Ford, D-Indianapolis, who spent much of his 30-minute-long speech speaking about Republicans like Holcomb and Utah Gov. Spencer Cox who oppose this and similar bills, responded to Donato by saying many of those laws are currently being challenged in courts.

Sen. Shelli Yoder, D-Bloomington, also spoke and asked if this was a worthy use of the Senate’s time.

“We are spending our time to make children feel bad about themselves,” Yoder said. “This bill is in no way a solution to a problem. It is a problem.”

Before the sessions began, members of the public stood in lines outside the House and Senate chambers waiting to be admitted.

LaKimba DeSadier, state director of Planned Parenthood, said she was there to “hold our legislators accountable.”

“We just want them to be accountable and truly represent their community,” DeSadier said.

John Lapp, who has a transgender child, said, “I feel very strongly that this is a hateful bill.”

“Everyone’s a human,” said Natalie Auberry. “It goes against my values to discriminate like this.”

She continued: “You know, I was very happy to see, personally, that there are more people here on this side of the issue than on the other side.”

A recent survey by American Principles Project, a conservative think tank, suggests that when it comes to Hoosiers overall, they do support the bill.

In a survey of around 1,000 likely voters, 64.5% said they would “support legislation that banned biological male students that identify as transgender girls from competing in girls’ sports programs at Indiana K-12 public schools. Some 53% disapproved of Holcomb’s veto.

City-County Observer Footnote: Area Lawmakers who voted to override the governor’s veto to protect the integrity of the “Trans” Athlete Bill in Indiana were TIM O’BRIEN (R), WENDY MCNAMARA (R), MATT HOSTELLER (R), AND CINDY LEDBETTER (R).  The lone area Democrat who voted not to overturn the Governor’s veto was RYAN HATFIELD (D).

At press time we had a problem verifying how Indiana State Senators Becker (R) and Toomes (R) voted on this issue but shall provide our readers an update once we find the results.

EVENING WITH LIZ MOORE TODAY AT 8 PM AT WILLARD LIBRARY