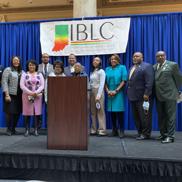 INDIANAPOLIS—Members of the Indiana Black Legislative Caucus said they are working as a group during the 2022 legislative session to help dismantle systems that have harmed Black communities in Indiana.

The Indiana Black Legislative Caucus poses for a photo following its Jan. 11 press conference, where the group announced its legislative priorities. The group is working as a team this year to dismantle issues facing the Black community, Chair Robin Shackleford, D-Indianapolis, said.

The IBLC, a joint House and Senate caucus of Black legislators, announced its legislative priorities in the halls of the Indiana Statehouse Tuesday. Robin Shackleford, D-Indianapolis, is the chair of the caucus.

“After failed attempts at raising the income of Black families, African Americans still battle large, wealth, education, health and other gaps in this country,” Shackleford said. “For these reasons and more, we feel it’s time not only to have the conversation but to take action.”

Shackleford said the IBLC is being intentional in choosing bills that tackle racial disparities in Indiana.

Shackleford is introducing House Bill 1067, which would require the Division for Family and Social Services to continue waiving childcare copays for eligible families and reimburse eligible providers using COVID-19 relied funds until the federal pandemic emergency ends. It would also request a study on childcare issues.

Sen. Greg Taylor, D-Indianapolis, authored a bill to create a refundable child and dependent care tax credit for Hoosiers whose income is not more than 250% of the federal poverty level.

As part of its priorities, the group is aiming to make education more accessible and affordable.

House Bill 1016, authored by Rep. John Bartlett, D-Indianapolis, aims to create a parent education assistance pilot program, which would help give Hoosier parents access to education through a grant.

In Senate Bill 151, Sen. Jean Breaux, D-Indianapolis, seeks to establish a scholarship and fund for minority students in healthcare careers.

Rep. Ragen Hatcher, D-Gary, has filed a bill that would get rid of the requirement for pre-trial bail for people arrested for nonviolent crimes or misdemeanors.

Rep. Renee Pack, D-Indianapolis, authored a bill that would require boards of directors to increase the diversity within their membership.

In response to recent reports of housing discrimination in Indiana, Rep Cherrish Pryor, D-Indianapolis, authored a bill that would establish a fair housing practices fund to provide down payment assistance and grants. The bill would also require cultural competency and implicit bias training for appraisers.

A Senate bill by Sen. Eddie Melton, D-Gary, would create a Lake County convention and entertainment district fund that would be administered by the Northwest Indiana Regional Development Authority.

Rep. Vernon Smith, D-Gary , authored Senate Bill 1267, which would create a food and beverage tax in the town of Merrillville to be used to build a convention center.

A House bill that would exempt business personal property from property assessment and taxation was filed by Rep. Greg Porter, D-Indianapolis.

Taylor Wooten is a reporter for TheStatehouseFile.com, a news website powered by Franklin College journalism students.