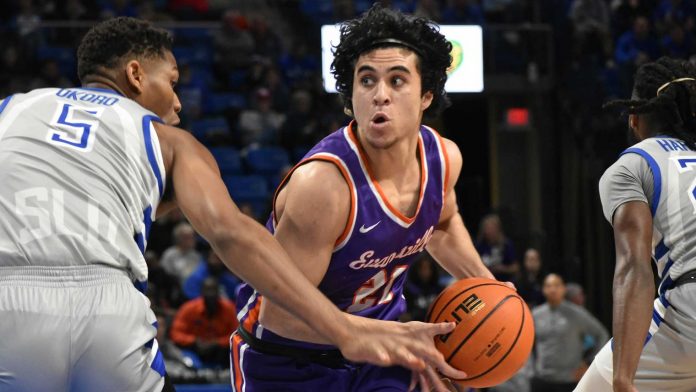 SAVANNAH, Ga. – Savannah, Georgia will be the scene of the Hostilo Hoops Community Classic, which will see the University of Evansville men’s basketball team open play on Friday evening against South Alabama.

Tip is set for 5:30 p.m. CT at Enmarket Arena with the Purple Aces Radio Network and BeTheBeast having the coverage.

– Evansville and South Alabama are set to meet for the 5th time in their histories and the first contest since 1994; UE has won three of the first four match-ups

– For the first time on the hardwood, the Purple Aces take on Fairfield in Sunday’s finale

– In another hard-fought contest, Evansville gave UCF all it could handle before a late stretch gave the Knights a 76-56 win

– Kenny Strawbridge Jr. was the leading scorer in the contest, totaling 20 points on 8-of-19 shooting

– UE scored the opening six points of the game and would trail by just five at the break…in the second half, UE got within two points before the Knights pulled away

– Kenny Strawbridge Jr. reached the 20-point mark for the third time this season as he scored 20 at UCF

– He attempted a career-high 19 shots

– He has attempted at least 13 shots in all five games

– Blaise Beauchamp averaged just 4.67 points per game in the opening three games but has rebounded to average 12.5 points in the last two

– At SMU, he scored a season-high 16 points while hitting four triples (he hit a total of three triples in the first three games)

Leader on the Boards

– For the second time this year, Marvin Coleman II tied his career-high with 12 rebounds at UCF after doing the same against SEMO

– South Alabama comes into the weekend tournament with a 1-3 record, but the Jaguars have played well against top competition

– Following a 97-59 win over Mobile in the season opener, the Jaguars fell by just six at New Mexico

– Isaiah Moore paces the Jaguars with 19.5 points per game while chipping in 4.0 rebounds

– Kevin Samuel checks in with 11.5 points and a team-best 9.3 caroms per contest