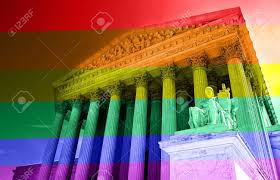 The teacher fired from Cathedral High School for being in a same-sex marriage sued the Archdiocese of Indianapolis in Marion Superior Court on Wednesday, alleging the church leadership illegally interfered with his contractual and employment relationship with the high school, which led to his termination June 23.

Joshua Payne-Elliott filed the lawsuit after he reached a confidential settlement with Cathedral on Tuesday. The agreement settled all legal claims against the school, including complaints arising from the termination of employment and allegations of a hostile work environment.

In addition to his state lawsuit, Payne-Elliott has filed charges of discrimination with the U.S. Equal Employment Opportunity Commission. He asserts the archdiocese discriminated on the basis of sexual orientation and retaliated against him for opposing sexual-orientation discrimination.

Payne-Elliot’s attorney, Kathleen DeLaney, said once the EEOC makes a ruling, he intends to file a Title VII lawsuit against the Archdiocese in federal court.

“We intend to hold the Archdiocese accountable for violations of state and federal law,” DeLaney of DeLaney & DeLaney LLC, said.

Responding to a request for comment about the pending litigation, the Archdiocese indicated its actions are protected under religious liberty.

“In the Archdiocese of Indianapolis’ Catholic schools, all teachers, school leaders and guidance counselors are ministers and witnesses of the faith, who are expected to uphold the teachings of the Church in their daily lives, both in and out of school,” the Archdiocese said in a statement. “Religious liberty, which is a hallmark of the U.S. Constitution and has been tested in the U.S. Supreme Court, acknowledges that the religious organizations may define what conduct is not acceptable and contrary to the teachings of its religion, for its school leaders, guidance counselors, teachers and other ministers of the faith.”

“We hope that this lawsuit will put a stop to the targeting of LGBTQ employees and their families,” Joshua Payne-Elliott said.

According to the complaint, Cathedral had already renewed Joshua Payne-Elliott’s teaching contract for the 2019-2020 school year when days later the Archdiocese told the school it had to enforce the morals clause language in its teacher contracts.

Cathedral president Robert Bridges then terminated Payne-Elliott’s employment. According to the lawsuit, Bridges told the teacher the school’s action “feels like with a gun to our head” because of the archdiocese’s directive. Payne-Elliott, the lawsuit states, was not fired for any performance-based issues.

The teacher alleges in his lawsuit the archdiocese intentionally interfered with his contractual and employment relationship with Cathedral. Namely, according to the complaint, the archdiocese demanded the school fire Payne-Elliott and threatened negative consequences if the school refused.

In a letter posted to its website June 23, Cathedral explained it was terminating the teacher after the Archdiocese threatened to no longer recognize the school as Catholic. Cathedral would have lost its ability to celebrate the Sacraments and its nonprofit status.

Both the teacher and the school were amicable toward each other in the announcement of the settlement. The teacher thanked Cathedral for the opportunities he had at the school and said he does not wish any harm to his former employer. Cathedral, in turn, thanked the teacher for his service, contributions and achievements.

“(My client) is pleased to have come to a confidential agreement with Cathedral High School,” DeLaney of DeLaney & DeLaney LLC, said. “He is looking forward to transitioning to a new teaching position and he hopes the attention brought by the recent actions of Archbishop (Charles) Thompson against the LGBTQ community will pressure the archdiocese to back off this witch hunt.”

Businesses Want A Shield Against COVID-19 Lawsuits. But What About Customer Safety?