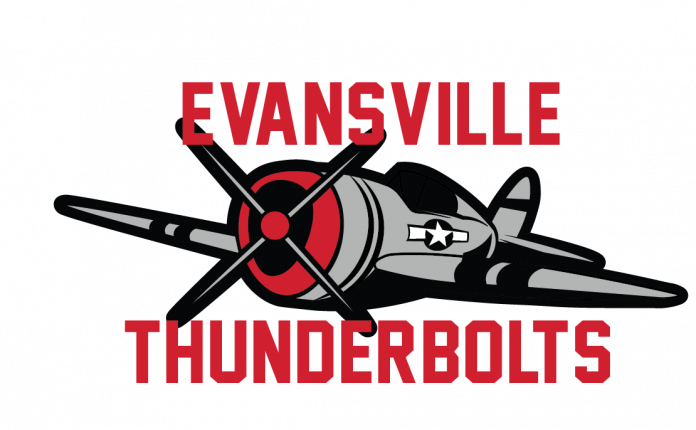 Peoria, Ill.: After leading over Peoria three times in regulation, the Thunderbolts and Rivermen went to overtime for the second time this season, with the Thunderbolts coming up victorious off a goal from Mike Ferraro, 4-3 on Wednesday night in Peoria.  The Thunderbolts’ next home game will be on Friday, December 2nd against the Quad City Storm at 7:00pm CT.  For tickets, call (812)422-BOLT (2658), go to EvansvilleThunderbolts.com, or visit the Ford Center Ticket Office.

Andrew Shewfelt gave Evansville a 1-0 lead at the 6:49 mark of the first period, assisted by Hayden Hulton.  In the second period, Alec Hagaman tied the game for Peoria only 2:19 into the middle frame, before the Thunderbolts regained the lead as Brendan Harrogate scored a power play goal at 15:33 from Cameron Cook and Scott Kirton to make it 2-1 Evansville.  The Rivermen again bounced back as Cayden Cahill scored with 16 seconds remaining in the second period to tie the game 2-2.

In the third period, Hayden Hulton deflected a Dillon Hill shot into the net at 4:28, also assisted by Harrogate, to put Evansville in front 3-2.  The Rivermen again responded on a 5-on-3 power play as Alec Baer scored at 11:35 to tie the game 3-3, with the Thunderbolts penalty kill doing solid work ensuring the Rivermen did not take a lead on the remaining power play time.  In overtime, Ferraro scored on a 2-on-1 break from Scott Kirton, also assisted by Felix Sasser, to win the game for Evansville at 2:50 of overtime.

Hulton and Harrogate finish with a goal and assist each, while Ferraro and Shewfelt scored one goal each. Kirton finished with two assists, while Chase Perry stopped 34 of 37 shots faced in net for his first win as a Thunderbolt.  These two teams meet again on December 30th at Peoria Civic Center.