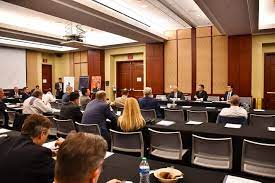 INDIANAPOLIS—Many are familiar with Indiana’s legislative session, during which bills are passed or killed—but fewer know what summer study committees are.

That’s when the Legislative Council compiles a list of topics to be discussed, and people share information to help lawmakers make decisions on what bills they should write or vote on in the future. House Speaker Todd Huston, R-Fishers, released this summer’s study committee topics late last month, and they include hospital prices, discrimination in housing appraisals, the maternal mortality rate and more. For a full list, go here.

Dr. Andrew Downs, associate professor and director of the Department of Political Science at Purdue University Fort Wayne, said the purpose of a summer study committee is “to spend concentrated time investigating issues that have already come up or will come up.” Downs said calling them summer study committees is a “misnomer” because some of the committees meet in the fall—but all meet before the legislative session starts in January.

Downs said that once a committee is named, it will hold hearings with agendas. Committee meetings do not have to be held at the Indiana Statehouse the way a legislative session would require. They can be held in other locations, especially if the topic is more specific to one area.

According to Downs, there is less pressure in a summer study committee than a legislative session, and more time is given to the assigned topic. The public can attend hearings or write letters to their legislators during this time.

“It is unfortunate more people do not participate,” Downs said, since there is “more time to testify” and “more opportunity for input.”

Downs does understand the difficulty with participating, however.

“[It requires the public to] be attentive over a much longer period of time,” he said. “There is not a calendar that exists that is as neat and tidy as the legislative sessions.”

Topics in committees can be ongoing, such as Medicaid insurance, or new issues that have not been regularly discussed, such as COVID-19.

Summer study committees can be helpful due to the pressure of a legislative session, according to Downs. It can help prevent lawmakers from “making things up on the fly,” he said. Less typically, lawmakers might use them to stall out legislation.

Huston announced that House and Senate leaders will assign legislators to their study committees in the next few weeks.

“These committees are a critical part of the legislative process as they give us an opportunity to fully vet complex topics and identify potential solutions,” said Huston.

Although he does not have his study committee assignments yet, Sen. J.D. Ford, D-Indianapolis, said he is most excited for the topics of housing, marijuana decriminalization, combating maternal mortality rates and school funding.

“The funding formula is broken,” said Ford, citing a story he heard in which one student in a family was receiving funding while the other was not. Ford wants to set up a system that captures real-time information to get the appropriate funding sent to schools. “A lot of schools could use a few extra bucks,” he said.

Ford said he thinks the decriminalization of marijuana could be the most controversial of the committee topics, but he doesn’t see it that way and was excited to see it on the list.

This will be Ford’s fourth summer on the Legislative Council. He also sent 11 letters to the council about topics he wanted to be assigned to summer study committees. One of his most passionate topics that did not make the list was the topic of coercive control in an intimate partner relationship. Ford cited the Johnny Depp and Amber Heard trials as an example. This coercive control can occur through financial, psychological, or emotional abuse.

He doesn’t think the committees were used to stall ideas this summer. “Usually, the stall method happens when we are actually in the legislative session,” said Ford. “Typically, when we can’t come to a consensus or we think it’s a terrible bill and we want to send it to the summer study committee, that’s our stall method of saying, ‘It needs more time.’”

Not all the topics listed have had lots of discussions. Ford provided an example of the financial institutions and insurance committee, which will be dealing with Indiana’s high hospital prices. “We have one of the highest hospital prices in the country. This is an opportunity for us to dig in and delve deeper into that,” he said.