Yesterday the Evansville Vanderburgh School Corporation announced the 13 inductees for the EVSC’s Hall of Fame, Class of 2022. The biennially-awarded EVSC Hall of Fame honors distinguished individuals who exemplify outstanding achievement in their life’s work and who have made a positive impact on public education in the greater community. It also emphasizes the importance of service to the community and inspires EVSC students to seek excellence in their own education and careers.

“We are extremely honored to recognize the EVSC Hall of Fame Class of 2022,” said EVSC Superintendent David Smith. “They exemplify the best of the best in our local community and across the United States. Their life’s work has been to strive for excellence underpinned with passion and true servant leadership and we are proud for them to represent the EVSC in this manner.”

The final 13 inductees were among numerous nominations and were selected by a panel of judges. The inductees will be honored on March 8, 2023, at An Evening to Remember celebration dinner sponsored by the EVSC Foundation. The program will begin at 4:30 p.m., at the DoubleTree by Hilton, Evansville. For sponsorship information or other inquiries,  call the EVSC Foundation at 812-435-0913.

The 2022 EVSC Hall of Fame honorees are: 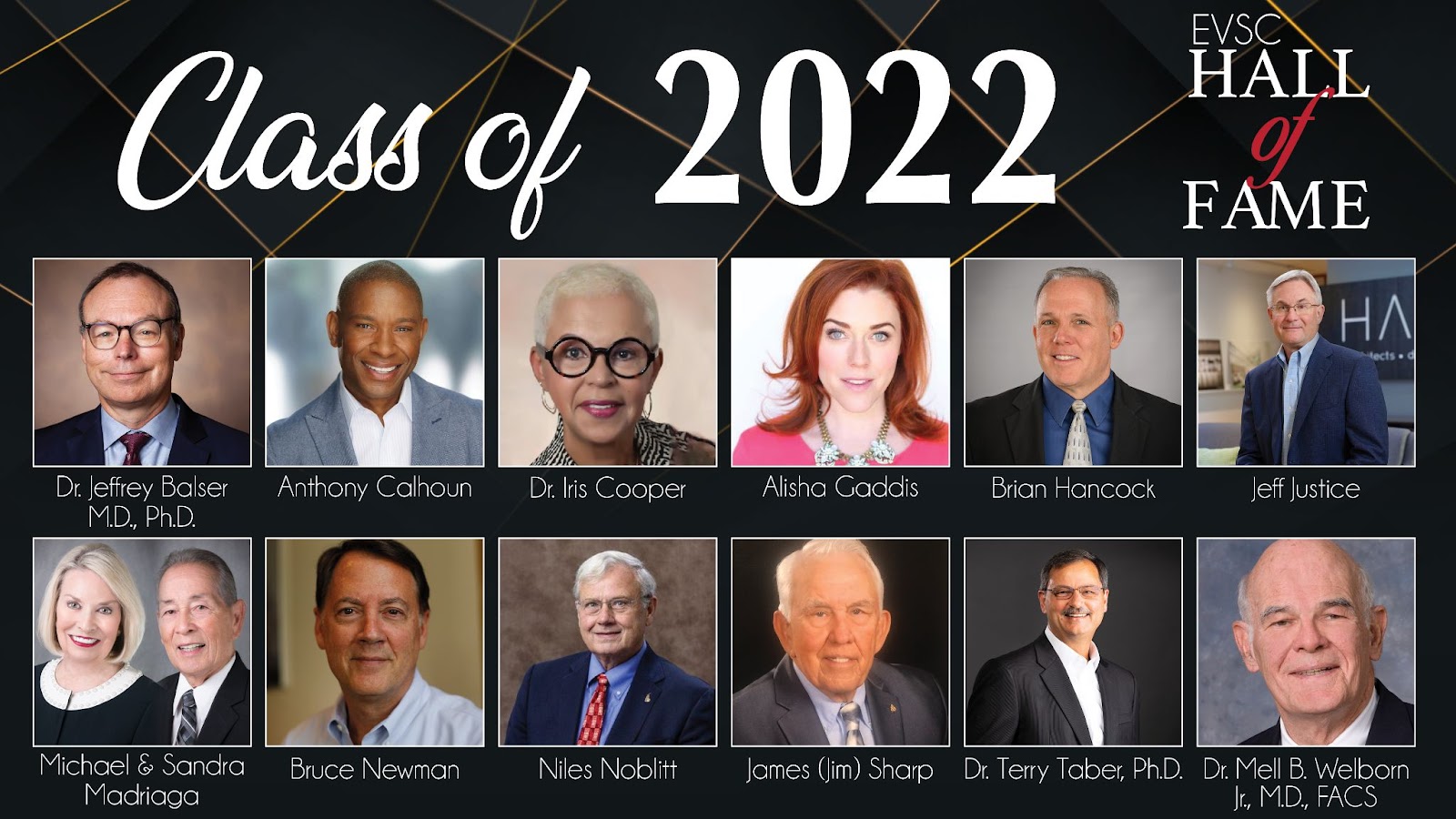 Mr. Anthony Calhoun, also known as A.C., an Evansville native and Bosse High School alumnus, is an Emmy Award-winner, and the prestigious Pathfinder Award recipient from The Indiana Sports Corporation. He leads a TV sports team in Indiana as Sports Director and is the main anchor at WISH-TV in Indianapolis.  A.C. is a graduate of Syracuse University, where he received his Bachelor of Science degree in Broadcast Journalism.

Dr. Iris Cooper, the Co-Founder of Glory Foods, Inc., of the first minority-owned food product line in the nation. An alumna of Bosse High School, she received her Bachelor of Arts degree in journalism and her M.B.A degree in marketing from Indiana University, Bloomington.  Dr. Cooper earned her D.B.A degree in entrepreneurship from Walden University in 2016. She was the 2006 YWCA Woman of Achievement and 2008 Woman of Economic and Leadership Development. Dr. Cooper is also a recipient of the Amos Lynch Legacy Award from the Champions of Diversity organization and the Sharon Burkes Soar Award from Franklin County Children’s Services for her advocacy work in Central Ohio.

Ms. Alisha Gaddis is an EMMY Winning Actress, six-time EMMY Nominated Actress & Producer, two times Latin GRAMMY Award Winning Performer & Producer, Best-Selling Author, and Wanderlust Advocate based in Los Angeles.  She is a graduate of Reitz High School and New York University’s Tisch School of the Arts. Alisha’s acting talents cultivated in the EVSC have allowed her to reach children all over the country and the world.

Mr. Brian Hancock, Evansville Market President / EPIC Insurance Brokers & Consultants is an alumnus of Bosse High School, Class of 1985, and earned his Bachelor of Science degree from USI, in 1990 and Leadership Development Certification in 2015 from ONB/Butler University. Brian was the Past President & retired Board member of the EVSC Foundation (his greatest moment during that tenure was the directional growth of the Foundation as well as the merger of Hangers under the guise of the Foundation), present board member of  YMCA of Southwest Indiana among others, and is an advocate for public education, EVSC as a corporation. Brian has a strong passion for mentoring youth in both faith-based and secular settings, and always puts his family first.

Mr. Jeff Justice, President of Hafer, is a graduate of Harrison High School Class of 1979 and received his Bachelor of Architecture degree from the University of Evansville.   Jeff’s community service efforts are extensive, including service on many non-profit boards, volunteerism, and monetary donations. A few of his charitable projects include Keep Evansville Beautiful- Design of the Airport-US 41 Gateway Project, Ark Crisis Child Care Center-Design of new Children’s Playground, and Freedom Heritage Museum-Design of a new Museum.  Jeff is a recipient of the Southwest Indiana Chamber Richard Schlottman Business Person of the Year, 2012, and Leadership Evansville, Regional Impact Award.

Mr. Michael (Mike) Madriaga, a North High School alumni, earned degrees from Evansville College and Indiana University. During his 31-year career, Mike served as a teacher, coach, and curriculum supervisor. As an administrator, he managed athletics, physical education, and driver education and led the sanctioning of soccer, softball, and swimming. As a four-sport athlete, Mike has received various honors including being inducted into the Indiana Sports, UE, and North High School Halls of Fame. After retiring from the EVSC, Mike served as Evansville’s Executive Director of Parks and Recreation.

Mrs. Sandra Madriaga, a Rex Mundi High School alumna, earned degrees from Indiana State University and the University of Evansville and completed postgraduate work in France and Japan. During her 40-year career, Sandra served as a French, English, and ESL teacher, department chair, curriculum supervisor, and director. Sandra created the International Newcomer’s Academy to address the academic needs of EVSC’s growing immigrant population. The Madriaga ESL Scholarship was created in her honor.

Mike and Sandra co-created and co-anchored EVSC Newsletter, a weekly television program highlighting EVSC students and staff. Together they serve on the Board of Teacher Locker, a free resource store for EVSC teachers.

Mr. Bruce Newman, a graduate of Central High School received his Bachelor of Arts in Journalism from Indiana University in 1975.  Bruce was a writer at Sports Illustrated magazine for 20 years, followed by 5 years as a freelance writer for The New York Times and Los Angeles Times, and then 16 years at the San Jose Mercury News, where he was the paper’s movie critic for 8 years and a general assignment reporter and feature writer for 8 years. Bruce is the first recipient of the William R. Reed Award for sports writing at student newspapers in the Big Ten (1973).

Mr. Niles Noblitt, a graduate of North High School and Rose-Hulman Institute of Technology, is known throughout the international world of orthopedics as the co-founder of Biomet, a company specializing in reconstructive products for orthopedic surgery, neurosurgery, craniomaxillofacial surgery, and operating room supplies. He is the Chairman of the Board of Rose-Hulman Institute of Technology. He helped establish the Noblitt Scholars at Rose-Hulman for all students to have the opportunity to attend his alma mater and pursue STEM education. He has been selected to become a member of the Indiana Academy, an organization recognizing leaders in college circles. His leadership was key to a successful $250 million Mission Driven Campaign at Rose-Hulman, and for 24 consecutive years, Rose-Hulman has been ranked as the number one undergraduate engineering college in the United States by the U.S. News & World Report.

Mr. James (Jim) Sharp, graduated from Owensville High School and Austin Peay State University, and served North High School as a teacher, school counselor, assistant principal, and principal for his entire career of over fifty years from 1958 to 1999. With countless hours clocked working for the betterment of students at North, Jim led the school to receive recognition as a Blue Ribbon School, as well as receiving individual awards like District Principal of the Year, and Indiana School Principal of the Year. Jim served on numerous accreditation committees, the Indiana Association of School Principals, and instituted the Academic Hall of Fame at North High School. Jim led by example, never asking anyone to do something he couldn’t do himself.

Dr. Terry Taber, PhD., the Chief Technical Officer of Kodak is a graduate of North High School Class of 1972 and Purdue University Class of 1976 with a degree in Chemistry. This was followed by a Ph.D. in Organic Chemistry from the California Institute of Technology in 1980 and an M.S., General Management, MIT. In 2017,  Dr. Taber was named President of the Advanced Materials & 3D Printing Technology Division and was named Senior Vice President, of Advanced Materials and Chemicals, on March 5, 2020. Dr. Taber currently serves on the Executive Advisory Board of FIRST Rochester (For Inspiration and Recognition of Science and Technology). He also serves on the Executive Committee of the Greater Rochester Chamber of Commerce and the Tocqueville Society Cabinet of the Greater Rochester United Way. He is a trustee of Roberts Wesleyan College and Northeastern Seminary.

Dr. Mell B. Welborn, Jr. M.D., FACS, the Performance Improvement Medical Director of Deaconess Regional Trauma Center is a 1955 graduate of Reitz High School, who decided he wanted to be a physician in 5th grade at West Heights grade school. Dr. Welborn, Jr. received his medical degree from Emory University in 1962, completed an internship and residency in general and thoracic surgery at Vanderbilt University in1968, and then completed a cardiovascular surgery fellowship at St. Louis University School of Medicine in 1971. During his fellowship, he served as a thoracic surgeon in the U.S Army Medical Brigade at the 22nd Surgical Hospital, Phu Bai, on the MASH unit in Vietnam.  For his life-saving service, and acts of heroism, he received the Army Commendation Medal, Vietnam Cross of Gallantry, and the Bronze Star.