The U.S. Environmental Protection Agency (EPA) is celebrating the successful completion of Children’s Health Month 2019 after conducting a number of key activities that support the agency’s commitment to protecting children where they live, learn and play.

“I am proud of the work we continue to accomplish to protect children’s health across the country,” said EPA Administrator Andrew Wheeler. “From proposing the first revisions to the lead and copper rule in nearly three decades to announcing $10 million in funding to replace old school buses, the Trump Administration is making tremendous progress toward protecting the most vulnerable among us from environmental hazards.”

As part of Children’s Health Month, EPA proposed an updated Lead and Copper Rulethat significantly improves the actions that water systems must take to reduce lead in the nation’s drinking water in Green Bay, Wisconsin. The agency’s proposal takes a proactive and holistic approach to improving the current rule – from testing to treatment to telling the public about the levels and risks of lead in drinking water. When finalized, this proposal will: 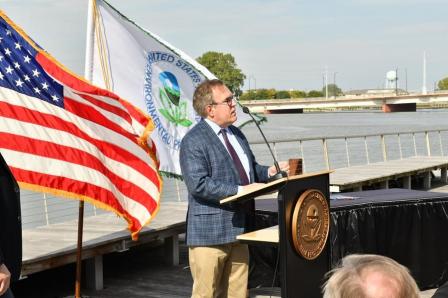 EPA announced 117 federal enforcement actions completed over the last year to ensure entities like renovation contractors, landlords and property managers are in compliance with regulations that require them to protect communities and the public from exposures to lead.

EPA signed a new Memorandum of Understanding (MOU) that provides a framework for a coordinated approach between more than a dozen critical partners across the federal government, tribes, water utilities and the public health community. The commitments of the MOU support the Lead Action Plan, which provides a blueprint for reducing lead exposure and associated harms by working with a range of stakeholders, including states, tribes and local communities, along with businesses, property owners and parents.

One existing effort that is further supported by this MOU is EPA’s 3Ts – training, testing and taking action – for Reducing Lead in Drinking Water in School and Child Care Facilities.

School buses travel over 4 billion miles each year, providing the safest transportation to and from school for more than 25 million American children every day. However, exhaust from diesel buses can harm health, especially in children, who have a faster breathing rate than adults and whose lungs are not yet fully developed. EPA has implemented standards to make newer diesel engines more than 90% cleaner, but many older diesel school buses are still operating. These older diesel engines emit large amounts of pollutants, including particulate matter, which is linked to instances of aggravated asthma, lung damage and other serious health problems.

Over the past month, EPA released the following reports:

Marijuana Dealers from Virginia Arrested on I-64