In commemoration of the U.S. Environmental Protection Agency’s (EPA) 50th anniversary, the agency is celebrating progress that has been made in protecting America’s waters throughout the month of February. This week highlights the agency’s progress in protecting our nation’s surface waters to improve these ecosystems and help protect public health.

“EPA is proud of the significant progress we have made in protecting and restoring our nation’s waters, particularly our surface waters. Many of our lakes, rivers and streams that were once severely contaminated now support healthy aquatic ecosystems and the surrounding communities,” said EPA Assistant Administrator for Water Dave Ross. “Working with the agency’s federal, state, local, tribal and water sector partners, we continue driving progress that protects the environment and human health.”

EPA kicked off February’s theme of protecting America’s waters by co-hosting a public meeting of the Gulf of Mexico Hypoxia Task Force in Washington, DC. The Hypoxia Task Force is a group of 12 states, a tribal representative and five federal agencies that work collaboratively to combat the nation’s largest hypoxic (low-oxygen) aquatic zone, which is located in the northern Gulf of Mexico. Reducing excess nutrients across a subcontinental watershed where millions of people live and the land supports a prospering nation is an enormous job that will take years to accomplish. At this meeting, states and federal agencies highlighted successes and remaining challenges in managing excess nutrients in surface waters throughout the Mississippi River basin.

Following the Hypoxia Task Force meeting, the U.S. Department of Agriculture (USDA) announced that it will make $17.5 million available in

2020 to support conservation investments by agriculture producers through its Mississippi River Basin Healthy Watersheds Initiative, and more than $38 million to support producers in 300 small watersheds across the nation, including many watersheds in the Mississippi River Basin. EPA welcomes USDA’s commitment to helping producers improve water quality, restore wetlands and enhance wildlife habitat, while ensuring the economic viability and productivity of agricultural lands.

Additionally, EPA houses a wide range of programs that are making progress protecting our nation’s surface waters. For example, EPA’s Section 319 Program has helped restore 832 impaired waterbodies, including helping partially or fully restore 250,000 acres of lakes and ponds as well as 10,000 miles of rivers and streams, since 2005 by providing funds to states, tribes and territories to help address nonpoint sources of pollution. Additionally, EPA’s National Estuary Program, with its partners, has protected and restored more than 2 million acres of estuary habitat since 2000. The agency has also helped restore approximately 4,316 acres of land and wetlands since 2013 through investing nearly $4.1 million into 193 community-based Five Star and Urban Waters Restoration Grant Program projects. 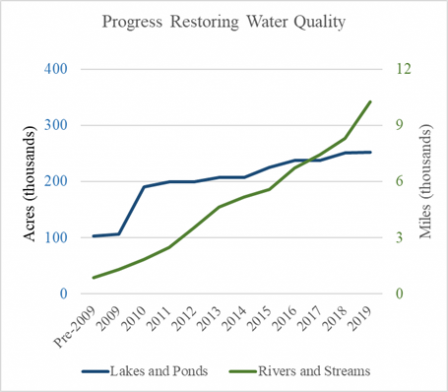 Commentary: A Profession Worth Respecting When Done Well