University of Southern Indiana Women’s Basketball takes on a pair of longtime Great Lakes Valley Conference rivals this week as it visits the University of Indianapolis Thursday at 4:30 p.m. (CST) at Nicoson Hall before hosting Bellarmine University Saturday at 5:30 p.m. at Screaming Eagles Arena.

Both games this week will be aired on 95.7 The Spin as well as the GLVC Sports Network, while live stats, audio and video can be accessed at GoUSIEagles.com.

• Third quarter sinks Eagles. A rough third-quarter led to a 94-69 setback in the Eagles’ game against No. 1 Drury Thursday. Johnson had a career-high 22 points, keeping the Eagles in the contest throughout the first half, but a six-point halftime deficit ballooned to 28 points 10 minutes into the second half as Drury outscored the Eagles 33-11 in the third period.

• Brown leads USI in blocks, rebounds. Sophomore forward Ashlynn Brown had six points to go along with a team-high seven rebounds and two blocks in USI’s loss to Drury.

• Johnson perfect at FT line. Senior guard Ashley Johnson went a perfect 8-of-8 at the free throw line in USI’s loss to Drury. 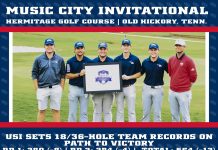