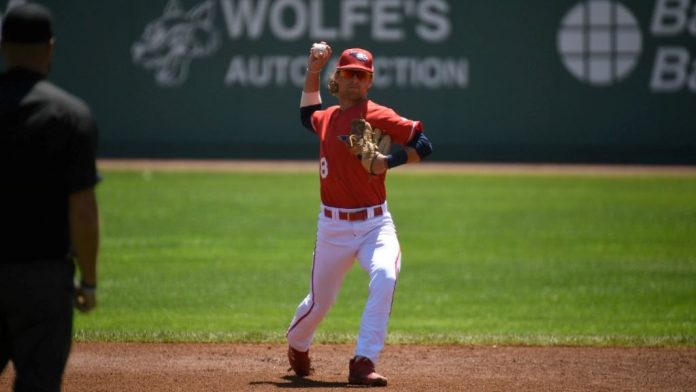 INDIANAPOLIS, Ind. – University of Southern Indiana Baseball completed its best weekend in the 2022 GLVC schedule by completing a four-game sweep of the University of Indianapolis, 9-7 and 11-6, Sunday afternoon in Indianapolis, Indiana. The Screaming Eagles finish the 2022 campaign 21-28 overall and 10-14 GLVC, while the Greyhounds are 20-29, 11-13 GLVC.

Game 1:
USI scored in each of the last four innings to outlast UIndy, 9-7, in the opener. The Eagles scored four in the second, one in the fourth, two in the fifth, and one more in each of the sixth and the seventh for the win.

The Eagles jumped out in front early, scoring four times in the top of the second inning on four hits and two walks. Junior rightfielder Ren Tachioka (Japan) drove in the first run with an RBI-single, while senior shortstop Ethan Hunter (Terre Haute, Indiana) knocked in a pair of runs and junior catcher Lucas McNew (Floyds Knobs, Indiana) pushed in the fourth with back-to-back doubles.

After the Greyhounds put a tally on the board in the third, USI regained the four run advantage, 5-1, when Hunter knocked in his third RBI of the game on an infield single. The four-run advantage did not last past the bottom of the fourth as UIndy tied the game at 5-5 with a four tally explosion.

USI junior centerfielder Evan Kahre (Evansville, Indiana) gave the Eagles back the lead, 6-5, with a RBI triple before extending the margin to 7-5 by scoring on a single by sophomore second baseman Alex Archuleta (Evansville, Indiana). The Eagles got the margin back to three, 8-5, in the top of the sixth when sophomore third baseman Daniel Lopez (Dominican Republic) drove in Hunter with a sacrifice fly.

The Greyhounds narrowed the gap once again in the bottom of the sixth, 8-6, before the Eagles scored for the fourth-straight inning. USI reacquired a three-run advantage, 9-6, when senior pinch runner Brice Stuteville (Rockport, Indiana) scored on the aid of a Greyhound error.

Following a UIndy home run to narrow the gap to 9-7, USI sophomore right-handed reliever Carter Stamm (Jasper, Indiana) closed the door on the victory in the seventh and recorded his second save of the season and the weekend by getting the final two outs.

The USI win on the mound went to freshman right-hander Gavin Morris (Brazil, Indiana), who relieved sophomore starting right-hander Trent Robinson (Louisville, Kentucky). Morris allowed one hit and struck out one in 1.1 innings of work.


Game 2:
USI senior shortstop Ethan Hunter and junior catcher Lucas McNew each hit two-run blasts to lead the Eagles to an 11-8 victory in the nightcap. The Eagles scored 10 of the 11 runs in the first four innings before holding on for the victory.

Hunter got the Eagles going in game two with a two-run homer for two of the three runs in the opening frame. The home run was Hunter’s fourth of the season and the 18th of his career.

UIndy did not let that lead last very long, scoring a trio of runs of its own in the bottom half of the first.

The Eagles responded by taking a commanding 8-3 advantage with three more in the second and two more in the third. McNew kicked off the scoring in the three-run second with a RBI single, while Hunter crossed the plate for the second time on a wild pitch and Kahre drew his second bases-loaded walk in as many innings.

USI extended the 6-3 lead to 8-3 in the third with two more. Hunter struck again with a RBI-single before UIndy aided the Eagles again by giving Lopez a bases-loaded RBI walk for the five-run lead.

McNew gave USI its largest lead of the game in the fourth, 10-3, with his own two-run blast. The home run was McNew’s team-best eighth of the season and the 20th of his career.

The 10-3 advantage shrank to 10-6 after the Greyhounds posted a pair of runs in the fourth and a tally in the fifth. The Eagles would get one of those runs back in the top of the seventh when sophomore leftfielder Gavin McLarty (Buckner, Kentucky) scored on a wild pitch for an 11-6 margin.

The Greyhounds would add two runs in the ninth, stranding the bases loaded, before the Eagles closed the door on the sweep, 11-8.

Freshman right-hander Tyler Hutson (Villa Hills, Kentucky) picked up his third save of the season by limiting the Greyhound to two runs after inheriting a bases-loaded no-one out jam in the ninth. Hutson posted a pair of strikeouts to get the final two outs after allowing a hit and a walk.

Up Next for the Eagles:
USI moves to the NCAA Division I and Ohio Valley Conference beginning in the 2023 season.