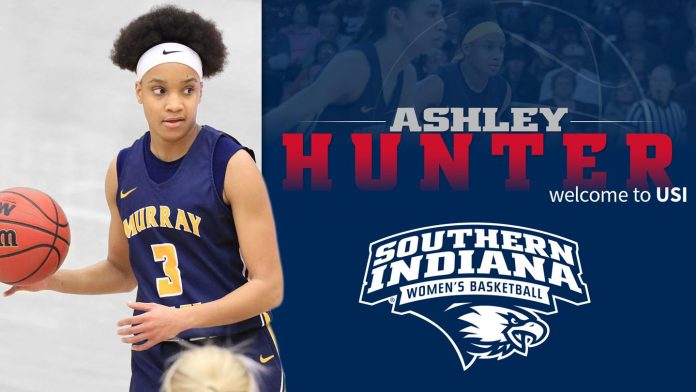 Hunter played in 22 games for the Racers as a junior in 2019-20, averaging 2.8 points and 1.0 rebounds per game. She led the Racers with a season-high 10 points in their season-ending loss to the University of Tennessee-Martin in March and had a season-high five rebounds against Cumberland University (Tennessee) last December.

Prior to Murray State, Hunter spent two seasons at Morraine Valley Community College, where she finished her two-year career ranked second on the program’s all-time scoring list with 1,206 career points.

She set multiple single-game records as a freshman, including an NJCAA record 21 field goals and MVCC record 48 points. Hunter finished with 611 points as a freshman, ranking third most for a Cyclone in a single-season—her 21.6 points per game ranked second-most in program history.

“”We are extremely excited to have Ashley join our Screaming Eagle family here at USI,” Stein said.” Ashley is a high impact player that can make plays for herself and for her teammates. She has three years of collegiate experience under her belt, and that will definitely help our team right away.

“Ashley is a proven scorer and with her athleticism, speed and quickness, she will fit well into how we like to defend,” Stein concluded.

USI finished the 2019-20 season with an 18-9 overall record and a 14-6 mark in Great Lakes Valley Conference play. The Eagles advanced to the NCAA II Tournament for the 11th time and were set to play No. 2 Ashland University in the opening round of the Midwest Regional before the COVID-19 pandemic put an end to the Eagles’ season.