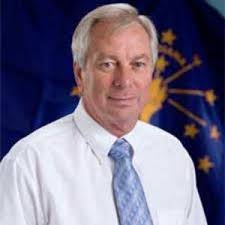 INDIANAPOLIS—Senate Bill 288, a bill that would punish schools and public libraries for sharing “harmful material” with minors, was withdrawn before its final reading in the Senate by the author of the bill, Sen. Jim Tomes, R-Wadesville.

He said he withdrew the bill because it didn’t get enough support in the Republican caucus Tuesday before the Senate’s final meeting during the first half of the legislative session. But he said he will bring the bill back next year.

“We have between now and maybe next year to think about these things and see what we can do with it and maybe address the bill a little bit different perhaps,” Tomes said. “The bill is still going to be the same. The goal will still be the same. I’m not going to back down from that.”

The bill had sparked debate, with opponents saying that the consequences of prosecution and vague definition of “harmful materials” could be detrimental to schools and libraries.

Sen. Jean Leising, R-Oldenburg, said during her point of personal privilege, or her chance to speak on the topic, at Tuesday’s session that she originally supported the bill but became very worried when she found out schools and public libraries would be at risk for Level 6 felonies.

According to Indiana law, a Level 6 felony—the same as possession of child pornography—carries a sentence of six months to two and a half years in prison and up to $10,000 in fines.

Leising had written an amendment for SB 288 to reduce the felony charge to a misdemeanor, which is generally less severely punished. However, since she didn’t get enough support from Republican senators during caucus Monday prior to session, she dropped the amendment before its reading.

Leising said that she has not visited any libraries in her district, and she doesn’t think many of the other senators have either, so she is still hesitant about this bill’s penalty against libraries. But she claimed a lot of her constituents, or voters in her district, are in favor of the bill.

“I’m hoping that, because of Sen. Tomes’s bill, it will have us all maybe a little bit more interested in this subject and why we are hearing from so many constituents about their concerns,” Leising said.

During his availability Tuesday, Senate President Pro Tem Rodric Bray, R-Martinsville, said that SB 288 is a difficult bill. He said Tomes didn’t bring the bill to vote because it didn’t seem to have support in the caucus.

He said the bill brings together two important concepts, with the first being the protection of children from seeing obscene materials and the second being about the government’s role in the process.

“How much do we want government telling people what they can and can’t read, or can and can’t look at,” Bray said. “Parents are good at that job, and more so than the government. And the local libraries and their boards kind of have some decisions and some authority they’ve got to put into play there as well.”

After narrowly passing in the Senate Education and Career Development Committee Feb. 17 after an amendment cut all but one section, the bill went through second reading Monday with no new amendments.

One of the bill’s authors, Sen. Dennis Kruse, R-Auburn, proposed the amendment during committee, in which only Section 4—stating that public and school libraries would not be protected from prosecution for dissemination of pornography or obscene materials to minors—was not deleted.

Kruse said he wanted to make the bill simpler and easier to understand. He added that there is not a set list of “harmful materials” because that is something a judge or jury would eventually decide on.

He said that historically, a case of distributing illicit materials or pornography to a minor has to be pretty bad for a prosecuting attorney to bring a case against someone for it. So he doesn’t think schools and libraries should worry about the felony charge.

“I would think the school libraries and public libraries would want this,” Kruse said. “I think they ought to want a high standard for their libraries. And they shouldn’t want anybody in their library distributing obscene materials or pornography to minors.”

According to the 2019 Indiana Public Library Statistics, the state’s 9,000 libraries hosted 60,547 children’s programs, with attendance at those programs over 1.1 million.

There were also more than 65 million materials in circulation, with over 21 million of those being for children.

While SB 288 would have removed schools and public libraries from the list of entities eligible for special defense against prosecution, it added colleges and universities to that list to be protected.

SB 288 had also removed “educational purposes” as a reason for defense against prosecution.

The Indiana American Civil Liberties Union issued a statement in opposition of SB 288, stating that by not presenting a clear definition of “harmful material to minors,” it raised due process and enforceability concerns.

“The vagueness of the statute could be used to silence protected speech on a multitude of various issue areas and has historically been used as a tool to ban sex education materials and materials about LGBTQ issues from local libraries if community members and local prosecutors find it objectionable,” the ACLU said.

Kruse said the bill would only affect LGBTQ materials if they are “obscene or pornographic.”

According to a Courier & Press article, in late 2018, the Evansville Vanderburgh Public Library hosted a children’s event that gained wide attention: Drag Queen Story Hour, a nationwide program in which drag queens, performers usually with roots in LGBTQ culture, read books to children.

Several prominent officials in Evansville, including City Councilman Justin Elpers, a Republican representing the city’s fifth ward, and Tomes—author of SB 288—said on social media that the event was wrong and, in Tomes’s post, “immoral.”

Tomes told The Courier & Press that it was “inappropriate” for young children and also for institutions to support that kind of event.

When he withdrew the bill Tuesday, he said the bill wasn’t made to ban books and go after teachers and librarians but to keep kids from “being exposed to stuff that’s way beyond their age.”

Tomes declined an interview with TheStatehouseFile.com, saying he is no longer interested to speak on the subject of SB 288 in any capacity since it “has died.”

When SB 288 was originally discussed in committee, several senators gave statements about why they voted either way.

Sen. Fady Qaddoura, D-Indianapolis, who voted no, said he thinks the bill is a slippery slope that could unfairly punish schools for trying to teach important topics like biology and health.

“I am not supportive of distributing harmful materials or pornography to minors, but when you talk about biology classes and showing the human anatomy and other types of educational material, I feel that we are shooting ourselves, literally, in the foot on this issue by censoring what libraries and educational institutions should be able to use to educate our kids,” Qaddoura said.

Sen. Scott Baldwin, R-Noblesville, voted yes for the bill. He said he initially had concerns about the bill regarding the First Amendment and civil lawsuits against schools and libraries.

“In its current form, I believe strongly now that we have tied the potential for prosecution directly to what is already in Indiana state law,” Baldwin said.

Withdrawn bills sometimes reappear as amendments to other bills still working their way through the legislature. Barring that, the next available opportunity to be heard would be at the next session in 2022.