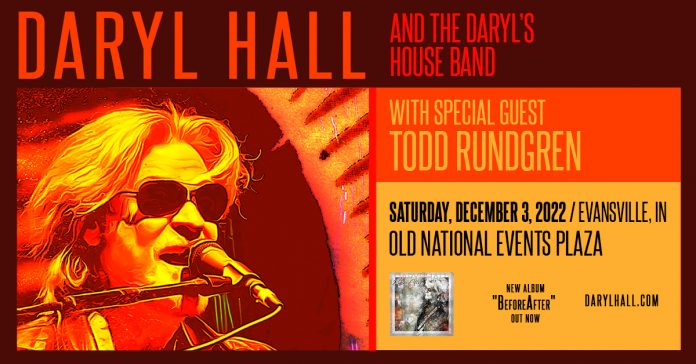 TICKETS GO ON SALE THIS FRIDAY, SEPTEMBER 23, AT 10 AM

Hall earned his place in the Rock and Roll Hall of Fame with the best-selling duo of all time, stars in his very own award-winning web series-turned-TV staple, Live from Daryl’s House, and owns a successful venue “Daryl’s House,” a restored live music space in Pawling, N.Y.

BeforeAfter features 30 tracks spanning all five of his solo albums, from the 1980’s Robert Fripp-produced Sacred Songsthrough 2011’s Laughing Down Crying, which was co-produced with longtime Hall compatriot T-Bone Wolk. Taken as a whole, BeforeAfter draws unexpected and satisfying connections between the esoteric and accessible sides of Hall’s creativity.

The collection also features six never-released performances from his groundbreaking web and TV series Life From Daryl’s House, including a recording of the Eurythmics classic “Here Comes The Rain Again,” performed with the song’s co-writer and Hall’s longtime friend and collaborator, Dave Stewart, a harmonious version of the Ruby and The Romantics chart-topper “Our Day Will Come”, and “Can We Still be Friends” with a friend and tourmate Todd Rundgren. Hall launched the series in 2007 with his then-novel idea of “playing with my friends and putting it up on the internet.”

Fans can learn more about the series at www.livefromdarylshouse.com and BeforeAfter athttps://legacyrecordings.link.to/BeforeAfterPR.

Tickets are available at Ticketmaster.com or the Old National Events Plaza Box Office. For more information about the Aiken Theatre, visit www.oldnationaleventsplaza.com