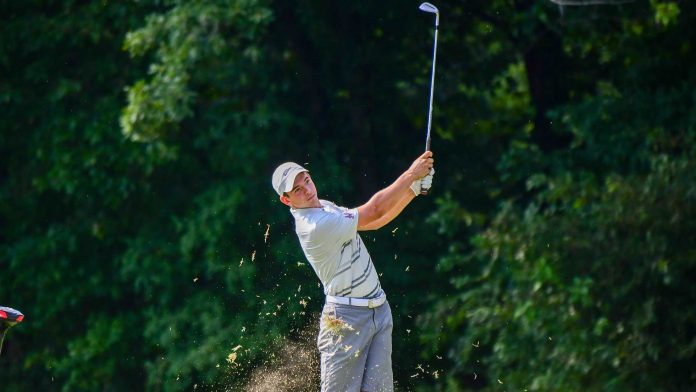 CHESTERTON, Ind. – Tying for the 5th-lowest team score of the day, the University of Evansville men’s golf team earned a 10th place finish at the Valpo Fall Invitational at Sand Creek Country Club on Tuesday.

Evansville’s lowest round of the day belonged to Luke Schneider.  A 1-under 71 gave him a 223 for the 3-round event.  He tied for the 22nd position.  Taking second on the team was Nicholas Gushrowski.  His 75 in the third round set his final score at 227, which was good for a 32nd-place tie.  One spot behind him was Daniil Romashkin.  Posting his low round of the event in the final 18, Romashkin carded a 74.  His score checked in at 228.

Michael Ikejiani was next for the Purple Aces.  He posted his low round of the weekend on Tuesday, finishing with a 76.  Ikejiani lowered his score in each round of the tournament to finish with a 236.  Henry Kiel was three strokes behind Ikejiani.  His 83 in the final round gave him a 239.  Playing as an individual, Carson Parker finished with scores of 77-76-77 to tally a 230.  He tied for 50th.  Mason Taylor had his best round of the year, scoring a 75 on Tuesday to finish with a 239.

Valparaiso clinched the team and individual championships.  A 278 in the final 18 gave the Beacons the lowest team round of the entire tournament while seeing them finish with an 848.  They finished 34 strokes in front of Loyola.  Anthony Delisanti of the Beacons defeated teammate Caleb VanArragon by one shot to earn medalist.  Rounds of 70-69-69 saw him post a 208.

UE wrapped up its three rounds with a 909 to jump into the top ten.  Their final score of 909 came in two shots in front of IUPUI.  The Aces continue their fall season on October 10 with a trip to Jonesboro, Arkansas for the Bubba Barnett Intercollegiate.