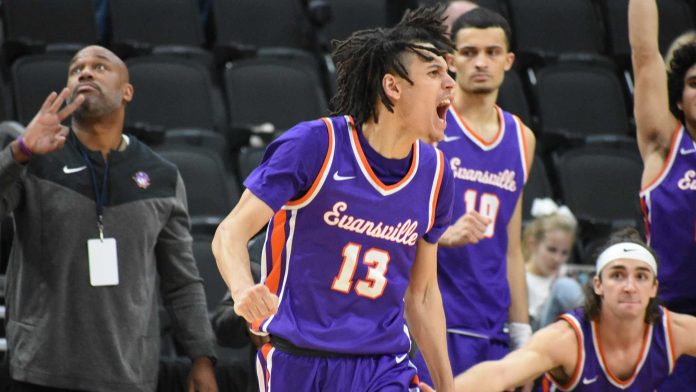 SAVANNAH, Ga. – With his team trailing by two points with 16 second remaining, Blaise Beauchamp knocked down his third 3-pointer of the night and it would prove to be the game-winner as the University of Evansville men’s basketball team defeated Robert Morris by a final of 54-53 at Enmarket Arena.

Trailing by 12 at halftime, UE opened the second half on an 8-0 run before taking the lead with 11:42 left in the game.  The teams swapped the lead multiple times before the Purple Aces earned their second win of the season.

“We told our guys that Robert Morris plays at a pace that we have not seen and we definitely struggled with it in the first half,” Purple Aces head coach David Ragland stated following the victory.  “I told our guys at halftime that we had a decision to make and I loved our response.  We kept fighting and showed our resiliency in the second half.  It is crazy how basketball works and I am happy for Blaise and our entire team.”

Strawbridge led UE with 21 points while hitting four triples.  Beauchamp finished the night with 14 points.  Robert Morris was led by Josh Corbin’s 22 points, 20 of which came in the first half.  Kahliel Spear notched a double-double with 16 points and 12 rebounds.

Eight of the first nine shots found the bottom of the net for Robert Morris as they took the early 19-8 lead.  Kenny Strawbridge Jr. opened the game with a putback before hitting two 3-pointers as he accounted for Evansville’s first eight points of the game.  The Colonials added another make to push the lead to 21-8.  Following eight missed shots in a row, Sekou Kalle turned an offensive rebound into a field goal to put UE back on the board.

Blaise Beauchamp converted his first triple with just over eight minutes left in the half to get his squad back within single digits at 24-15.  While the Aces got as close as seven points on a Chris Moncrief layup, Robert Morris extended the advantage to 14 before settling for a 37-25 lead at halftime.  Josh Corbin of RMU had 20 points, including six triples, at the break.

Just as he did in the first half, Strawbridge came out shooting, knocking down his third 3-pointer of the evening to open the second half.  His basket was the first of eight in a row by the Aces to make it a 37-33 game at the 16:51 mark.  Seven minutes into the half, Marvin Coleman II grabbed an offensive board and found an open Beauchamp who converted a triple to bring the Aces within one – 39-38.

Antoine Smith Jr. was held scoreless in the opening 20 minutes but his first field goal of the night was a big one as it gave UE a 40-39 lead with 11:42 left in the game.  His basket capped off a 6-for-12 start to the period for Evansville.  Robert Morris opened the stanza hitting one of its first 14 attempts before Corbin hit a layup with 9:24 left on the clock.

From there, it was a back-and-forth contest with each team holding multiple leads.  With UE down one, Strawbridge converted a 4-point play to give the Aces a 49-46 edge inside of the 5-minute mark but a triple on the other end saw RMU tie it right up.  He would make another critical play with 3:30 on the clock.  A perfect read on the defensive end saw him pick off a pass before turning it into a layup and 51-49 Evansville edge.

Robert Morris tied it up before taking a 53-51 lead in the final minute.  Just when it looked like the Colonials would wrestle away the win, Blaise Beauchamp drained a clutch 3-pointer with 16 seconds on the clock.  RMU was unable to convert in its final two opportunities and UE would hang on for the 54-53 win.  The Colonials finished with a slight shooting edge (38.8%-36.2%) while outrebounding the Aces by a 38-35 final.