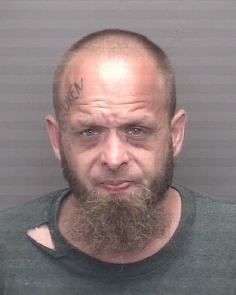 On January 16th, around 4:25 p.m., an EPD Officer working motor patrol in a marked squad car conducted a traffic stop on an individual who was riding a bicycle. The individual was identified as Robert Medlock. Medlock was riding his bicycle in the roadway and disregarded a stop sign at the intersection of Fourth Ave./Florida St. The officer witnesses the traffic violation and initiated his emergency lights. Medlock rode his bicycle into a yard and the officer exited his vehicle and approached Medlock.

Medlock ran away after the third cycle. The officer was able to get up and run after Medlock. He gave Medlock multiple commands to stop and get on the ground. Medlock refused to listen to any commands and gained entrance into a detached garage in the 1100 block of Georgia St. There were individuals inside the garage at the time and did not know Medlock. Medlock armed himself with an axe and blocked the door. He prevented the officers from getting inside. He also prevented the 3 individuals from exiting the garage. Officers eventually opened the door and got Medlock out of the garage and into handcuffs. While attempting to get

Medlock into the transport vehicle, Medlock kicked another officer in his shin and also caused a laceration to that officer’s hand.

The officer involved in the initial incident sustained multiple injuries including two puncture wounds to his ear, cuts on his right neck, contusion on his hand, laceration on his finger, a laceration on his tongue, and a chipped tooth. The officer was taken to a local hospital for medical treatment but has been released