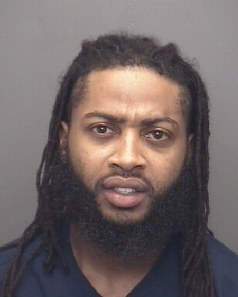 On July 28th, around 11:15 p.m., Evansville Police Officers were dispatched to the 3900 block of N. Fulton Ave. in reference to a Domestic Violence in progress. Officers located the Victim outside who stated that her boyfriend, Jayvontae Kelly, beat her up. Kelly punched, kicked, and hit the Victim with a piece of exercise equipment, which rendered her unconscious. Kelly then proceeded to stomp on her head. The Victim had visible injuries and officers called for AMR to provide medical aid to her.

Officers tried to make contact with Kelly, who was inside the residence. Kelly refused to answer the door but started yelling at officers. Dispatch notified officers that one of Kelly’s family members called and stated that Kelly had armed himself with a gun. The situation turned into a barricaded gunman.

EPD SWAT and Negotiators were called to the scene and a perimeter was set up around the residence. A negotiator made contact with Kelly and he made threatening statements about shooting police. The negotiator was eventually able to convince Kelly to put his weapon away and come out of the residence. Kelly finally agreed to come out of the residence but began throwing items at officers and would not comply with their commands to stop and get on the ground.

Kelly was eventually taken into custody with the aid of a CEW (conducted electrical weapon) but did not sustain any injuries. Kelly was transported to the Vanderburgh County Confinement Center and booked in on the charges of Domestic Battery with Serious Bodily Injury, Intimidation, and Resisting Law Enforcement.