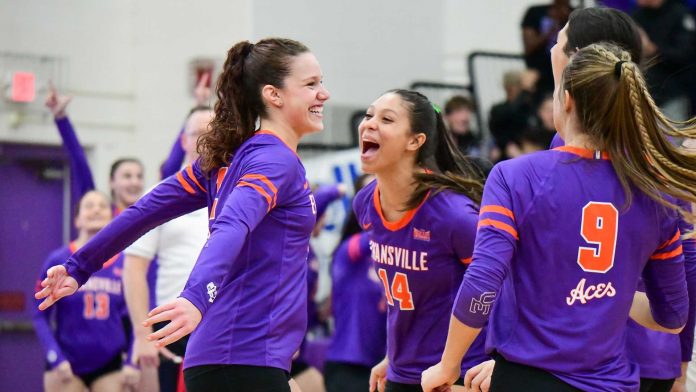 EVANSVILLE, Ind. – In one of the most exciting matches in program history, the University of Evansville volleyball team outlasted Southern Illinois in five sets to advance to the semifinals of the Missouri Valley Conference Championship at Meeks Family Fieldhouse.  With the victory, the Purple Aces advance to Tuesday’s semifinal round where they will take on top-seeded UNI at 3 p.m.

Southern Illinois scored the first three points of the match before Evansville found its rhythm.  Emilee Scheumann posted consecutive kills to help the Aces tie it up at 6-6 before two SIU errors gave UE its first advantage at 8-6.

Scheumann struck again with a kill in a stretch that put the Aces up by their largest margin of six points – 19-13.  Three in a row by the Salukis cut the deficit in half, but Alondra Vazquez had the final answer.  A pair of kill by the 5th-year player led the Aces to a 25-19 win to open the match.

Hannah Watkins capped off a 3-0 rally to open the set.  Vazquez added a kill and an ace as the lead grew to 7-2.  Southern Illinois responded to tie things up at 8-8.  Back-and-forth action saw the teams swap the lead but neither squad could wrestle away the lead.

That changed when the Salukis went up 21-19 before extended the edge to 24-21.  A point by UE put the ball in Giulia Cardona’s hands trailing by two with the set on the line.  Cardona’s ensuing performance was epic.  Three aces in a row put UE in control and it was Cardona who had the winning kill in a 26-24 decision.

Southern Illinois took an early 10-7 lead and would pace the set for the duration.  Evansville kept it close at 19-16 before a late run pushed the Salukis to the 25-18 decision to take the set.

Another early run saw the Salukis jump out to a 7-4 edge.  Blakeley Freeman recorded an ace to help the Aces score four in a row to go in front.   Up 15-14, UE reeled off four in a row to take a 19-14 advantage.  Scheumann picked up consecutive kills before Vazquez added an ace.

Madisyn Steele, Cardona and Vazquez picked up kills to help Evansville go up 3-0.  In one of the best sequences you will see on both ends, several defensive efforts kept the play alive and Cardona finished it off with a kill as the Aces went up 4-1.

UE’s effort was shown once again when Blakeley Freeman ran into a media table to save a ball that led to an Aces point.  Those instances led to a 10-4 advantage.  SIU kept fighting and utilized consecutive aces to make it a 10-7 game.  Things got even closer at 12-11 but it was a kill from Vazquez that gave UE some breathing room with a 14-11 edge, but once again, SIU fought back and tied it at 14-14.  It was Cardona who righted the ship, picking up a kill before Vazquez and Watkins assisted on the clinching block to send UE to the semifinals.