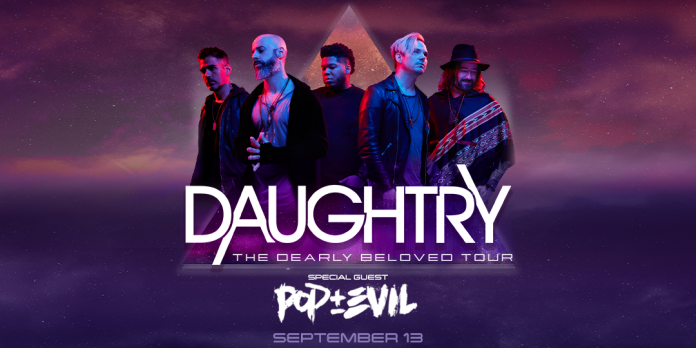 TICKETS GO ON SALE NATIONALLY ON MAY 20 AT 10 AM

Evansville, IN –  May 12, 2022 –  For the first time since 2013, rock band Daughtry will play at the Old National Events Plaza on September 13.  The band noted as one of the most visible and consistent Rock & Roll torchbearers of the 21st Century, has sold over 9 million albums and 16 million singles worldwide, selling out concerts across the globe.

The band’s self-titled debut album, Daughtry,  was the top-selling album of 2007, producing 4 Top 20 Platinum-selling singles on the Billboard Hot 100 list, becoming the fastest-selling rock debut album in Soundscan history. Daughtry earned 4 Grammy Award nominations and won 4 American Music Awards and 7 Billboard Music Awards including Album of the Year. The band’s subsequent albums, Leave This Town (2009), Break The Spell (2011), Baptized (2013) and Cage To Rattle (2018) was all certified Gold and placed in the top 10 on the Billboard Top 200 Albums Chart.  In 2020, Daughtry released their newest single, World On Fire, marking a return to the top of the US Rock Charts.

Special guest Pop Evil has been a staple rock band at major festivals, theaters, and clubs for nearly two decades. The band has celebrated several No. 1 Billboard Rock singles like: “Trenches,” “Deal with the Devil,” “Torn to Pieces,” “Footsteps,” and “Waking Lions.” Collectively, Pop Evil’s previous five albums account for over a million copies in worldwide sales and over 600 million streams.

The band’s album Up debuted at No. 25 on the Billboard 200 and produced three Top 5 Mainstream Rock singles: “Ways to Get High,” “Take it All,” and “Footsteps,” which went to No. 1. This was on the heels of the three No. 1 Rock singles from Onyx. Pop Evil debuted at No. 5 on the US Top Rock Albums chart and the single “Be Legendary” was one of the Top 10 most played songs of 2019.

Tickets:  Tickets start at $32.00 plus applicable fees and tax.