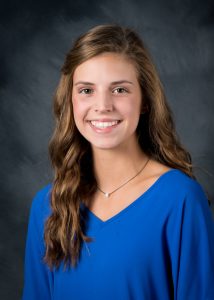 Reitz Memorial student-athlete, Tatum Tornatta (class of 2020), has given her verbal commitment to play volleyball for the Salukis at Southern Illinois University.
Tatum is entering her third season as a starter with the Tigers, under Coach Andi Allford.  She was a SIAC 1st Team pick in her Sophomore and Junior campaigns, and City Player of the Year as a Junior.  During that time Tatum helped lead her team to a combined 50-13 record and 16-2 in conference play with a 2017 Sectional title.  She also played basketball giving legendary Coach Bruce Dockery his 500th win and tennis on a team that was one win away from a state title.  She is an Evansville United club team member and has been invited to play with the USA Volleyball A1 Continental teams in the National tournament.
Tatum intends to pursue her student-athletic career in the area of health sciences at SIU, under newly hired Coach Ed Allen. Coach Allen has had stops at Anderson, Presbyterian, Tulsa and most recently the University of Alabama, where he compiled a record of 646-284 for a (.695) winning percentage.
Tatum’s parents are Troy Tornatta and Tomelle Greenfield, and brother Tucker (13).

Senator Feinstein And Husband Stands To Make A Fortune,