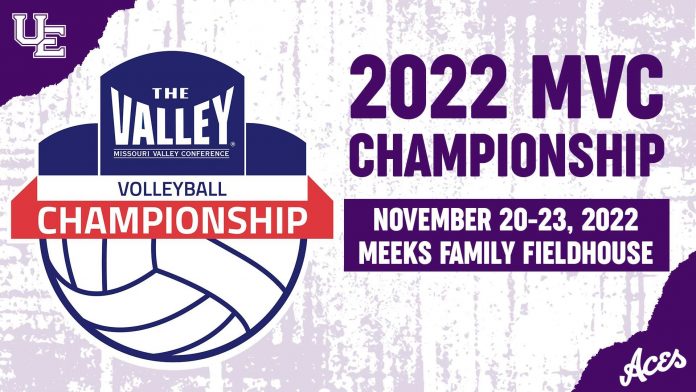 EVANSVILLE, Ind. – For the first time, the Missouri Valley Conference Volleyball Championship will be coming to Evansville.  Meeks Family Fieldhouse will be the site of the 2022 championship site in November.

“Having the MVC tournament in Evansville for the first time in history is a huge step for our program,” UE head volleyball coach Fernando Morales exclaimed.  “Our program has been growing over the last several years as well as the sport of volleyball in the Evansville area.  Having the top eight teams from one of the best conferences in the nation will help volleyball in Evansville to continue to grow.”

“I am excited about this season and the tournament in November.  See you in Meeks!”

Since taking over as head coach in 2019, Morales has directed the Purple Aces to two MVC Championship appearances in three seasons.  Prior to his arrival, the program did not make the tournament since 2008.  Last fall, the Aces finished with 21 victories, marking their first 20-win campaign since 1988.

UE was invited to the National Invitational Volleyball Championship (NIVC) for its first postseason appearance since the early 1980s and first as a member of the MVC.

“This is such an exciting announcement for our athletics department as well as the Evansville community as a whole,” UE Director of Athletics Dr. Kenneth “Ziggy” Siegfried stated.  “Coach Morales has taken our program to new heights while actively working to grow the sport in our community.”

“Around the nation, the Missouri Valley Conference is recognized for its volleyball success and to be able to host the championship at our facility is a testament to the hard work by our entire staff,” Siegfried continued. “We have so much positive momentum right now and this only adds to that excitement.”

Meeks Family Fieldhouse was renovated prior to the 2017 season and the finished product was one of the top Mid-Major facilities in the country.  Investing close to $1 million into the facility, UE was the first program in the MVC to utilize the Taraflex floor, which is the official floor surface of the Olympics.  Other upgrades included a videoboard, bleacher seating and LED boards on both sides of the floor, chairback seating, and an enhanced sound system.

The full tournament schedule is below.  All matches will be carried on ESPN+.  Ticket information will be released closer to the tournament date.