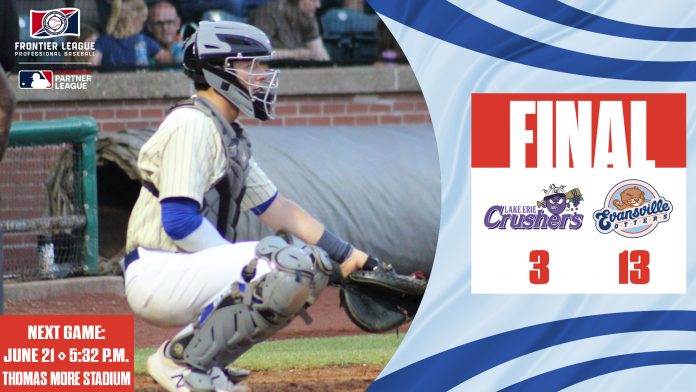 An 11-run fifth inning Sunday made the difference for the Evansville Otters as they defeated the Lake Erie Crushers 13-3 to capture another series win at home.

Starters Jason Alvarez and Ryan O’Reilly were hot out of the gate. Alvarez led off with three hitless innings, while O’Reilly struck out six straight batters between the first and third innings.

Finally, the offense awoke in the fifth as Jackson Valera brought in a run with an RBI single for Lake Erie.

The bottom of the fifth was all Otters. Back-to-back RBI hits from Miles Gordon and Zach Biermann kicked off the scoring. Then with the bases loaded, Dakota Phillips hit a grand slam to give the Otters a 7-1 advantage.

This caused the exit of Alvarez, allowing seven runs on five hits and failing to reach five full innings.

Gordon and Biermann again went back-to-back with RBI base hits. This time, a Jeffrey Baez RBI followed. When all was said and done, Evansville led 11-1.

After a scoreless inning for both sides, the offense returned in the seventh.

Lake Erie continued their offense with a second RBI single from Valera, bringing the Crushers within 10.

In the bottom half, Evansville added a pair of runs on a Biermann two-run home run, his league-leading 12th home run.

Lake Erie struck one final time in the ninth on a third RBI single from Valera.

Evansville carried the 13-3 advantage to the final, winning the series as well.

Ryan O’Reilly earned his second win of the year, with a season-high 10 strikeouts in the game. Alvarez took his second loss of 2022.

With their win, Evansville is 6-0 in series against West Division opponents and 14-3 in those games.

The Otters out-hit Lake Erie for the first time on the weekend, 14-9.

Evansville hits the road for the next six games – facing Florence and Lake Erie.

.The mid-week series with Florence begins Tuesday night at 5:30 p.m.(CT). Coverage begins on the Evansville Otters YouTube page at 5:20 p.m.(CT).