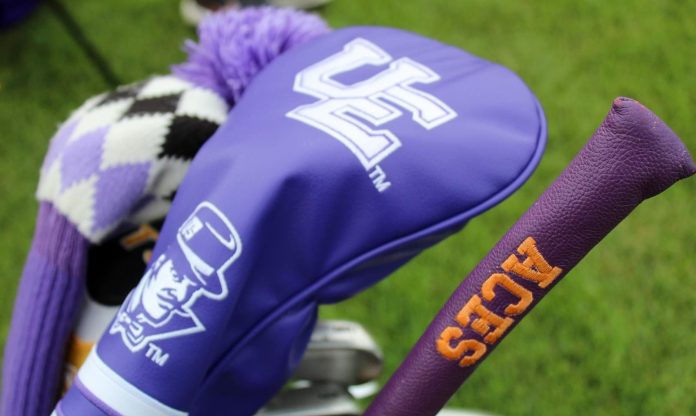 Trio to join UE team in the fall

EVANSVILLE, Ind. – Following a Missouri Valley Conference Championship in 2021, the momentum continues to build around the University of Evansville women’s golf program.  Pieces continue to fall into place for head coach John Andrews, who announced the signing of Destynie Sheridan and Ekaterina “Kate” Petrova to National Letters of Intent to play for UE beginning in the fall of 2022 while Grace Vandenburg will join as a walk-on.

“Destynie and Kate will help us right away with their background and experience,” Andrews explained.  “Kate has competed in tournaments representing her country throughout Europe while Destynie has won three state championships in her four high school seasons at North.  I believe that Grace’s best golf is in front of her.  We look forward to having all three ladies ready to go for the fall.”

Destynie Sheridan joins the Purple Aces following a championship career at Evansville’s North High School.  In her four seasons, the Huskies won three state championships while earning a runner-up finish in the other season.  That includes a championship in October of 2021 that saw her team win by 18 strokes.

Individually, Sheridan had several exceptional performances, including a 5-under 65 in September of last year to help North win its 10th straight IHSAA Sectional Championship.  Her efforts contributed to a team score of 274, which was the lowest sectional score in Indiana state history.  Her top finish at the state championship came in 2020 when scores of 76 and 78 tied her for 7th.  As a senior, her final tally of 155 put her a in tie for 15th on the way to the third championship in four years.

Ekaterina “Kate” Petrova comes to Evansville with a World Amateur Golf Ranking of 340.  The native of Moscow, Russia has had an exceptional career that includes a berth in the European Girls’ Team Championship.  Over the last two years, she has recorded two victories while picking up 12 top-10 finishes.

In July of 2021, she was medalist at the Russian Junior Tour – Gorki Golf Club.  Rounds of 65 and 72 gave her a 137, which was five ahead of second place.  At the end of September, Petrova was victorious once again, taking top honors at the Russian Cup.  The Russian Golf Association event was held at Gelendzhik Golf Club.

Vandenburg joins the program from Mishawaka High School where she made it out of the Penn Sectional as an individual in her senior season.

rio to join UE team in the fall