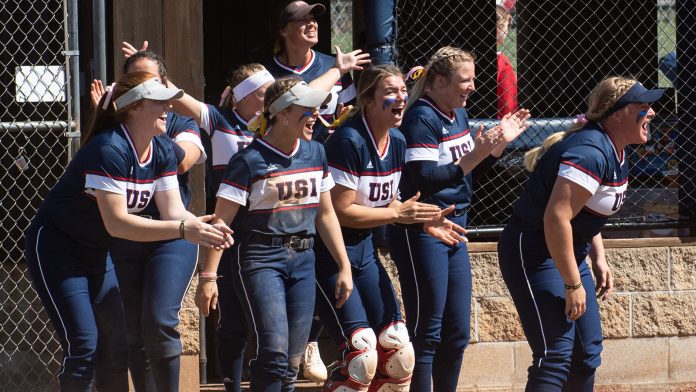 DENVER, Colo.—University of Southern Indiana Softball saw its historic 2022 season come to an end Friday with a 12-5 setback to No. 1-ranked University of Texas at Tyler in the elimination bracket of the NCAA II Softball Championship.

The No. 10 Screaming Eagles (49-13) railed from a pair of two-run deficits to take a brief 5-4 lead in the fifth inning, but the Patriots responded with eight runs in the bottom of the fifth to take a commanding 12-5 lead.

UT-Tyler (46-9) scored twice in the last half of the first inning to take a 2-0 lead, but the Eagles responded with a pair of runs in the top of the third frame as junior pitcher Allie Goodin (Evansville, Indiana) had a sacrifice fly before senior designated player/pitcher Katie Back (Indianapolis, Indiana) drove in the tying run with an RBI-single.

After the Patriots scored runs in the bottom of the third and fourth frames, USI roared back with a three-run fifth to take a 5-4 advantage. Back had a two-run triple to tie the contest at 4-4, while sophomore catcher Sammie Kihega (Greenfield, Indiana) put the Eagles on top with an RBI single.

UT-Tyler, however, scored eight runs in the bottom of the fifth to retake the lead and steal momentum from the Eagles.

Freshman pitcher Hailey Gotshall (Lucerne, Indiana) was charged with the loss after giving up four runs off four hits in an inning of work. She ends the season with an 8-1 record.

Notes
• Back ended her USI career with a 3-of-4 effort at the plate that included a double, triple, and three RBI.
• With three doubles on the day, USI set a new single-season record for doubles (96).
• USI’s accomplishments in 2022 included:
–The best start to GLVC play (16-0).
–A tied program record for consecutive wins (18).
–A set record for GLVC wins (26) in a single season.
–A set record for wins in a single season (49) … the previous record was 48 (1998).
–First time in program history winning GLVC regular-season, GLVC Tournament, and NCAA II Midwest Region titles in the same season.
–Set program records for triples (28), runs (353), RBI (327) and doubles (96).
–Best 40-game stretch in program history, having gone 37-3 entering NCAA II Championship.
• The 2022 season was USI’s final year in Division II. The Eagles will compete in Division I as part of the Ohio Valley Conference beginning in 2023.