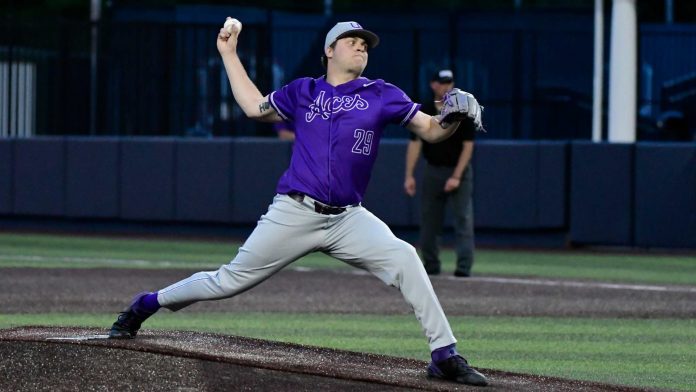 DALLAS – Behind an incredible performance on the mound from Shane Gray and big bats, the University of Evansville baseball team captured a 9-2 series-opening victory over Dallas Baptist on Friday night in Dallas, Texas.
“Just a dominant performance from Shane Gray and we made our six hits matter,” said Aces head baseball coach Wes Carroll. “The great at bats leading up to the six hits were special too. Borgstrom has a great at bat early and gets the two-run hit to get us going. Roberts and Hug go up top to give us enough offense for the day. Really proud of our guys tonight to start the weekend”

Gray notched his first career nine-inning complete game and the first by an Ace since Patrick Schneiders went the distance against FGCU on April 2, 2016. The right-hander allowed just two runs on six hits in his sixth victory of the season, striking-out a season -best 10 batters and giving away just one free pass.

Offensively, Evansville matched DBU with six hits, making the most of its opportunities. The Aces recorded hits up and down their lineup with six players getting a hit on the day and three generating two RBI.

Evansville showed a prelude of how the evening would go in the top of the first, garnering a pair of walks and forcing DBU starter Jacob Meador to throw 24 pitches in the opening frame. The Patriots would open the scoring in the bottom half of the first as Ryan Wrobleski lifted a solo homer to left to give DBU a 1-0 lead.

The Aces answered in the next half inning, hanging four runs on the board through a two-run double from Danny Borgstrom, followed by a sacrifice fly from Mark Shallenberger, and finally an RBI double from Tanner Craig as UE jumped out to a 4-1 lead.

Gray took control in the bottom of the second, sitting the Patriots down in order with a pair of groundouts and a strikeout. Showcasing the depth of its lineup, Evansville added more runs in the top of the third. After a pop out opened the frame, Brendan Hord forced an error to put a runner on for Eric Roberts. The senior responded, blasting a two-run shot that clipped the top of the scoreboard and built a 6-1 advantage for the Aces. Just two batters later, Chase Hug added on another home run, this one a solo blast as UE’s lead was lifted to 7-1.

A run from DBU in the bottom of the third capped-off an eventful opening three innings in the game with neither side pushing across runs until the fifth. In the aforementioned inning, Evansville added two insurance runs, scoring a run on an error from the Patriots and picking up another on a sacrifice fly to right from Chase Hug that pushed it to a 9-2 advantage for the Aces.

Gray, whose performance was already noteworthy through four innings, sat 12 of the next 13 batters down, allowing just one runner to reach from the fifth through the eighth inning. In the ninth, DBU loaded the bases with no outs, but Gray struckout a batter for the first out and then induced a double play to close-out the contest for a 9-2 UE win.

The win is Evansville’s ninth-straight victory, the longest winning streak for the Aces since a 10-game win streak in 2006.

Evansville and DBU meet for the second game of their weekend series on Saturday at 2 PM in Dallas.