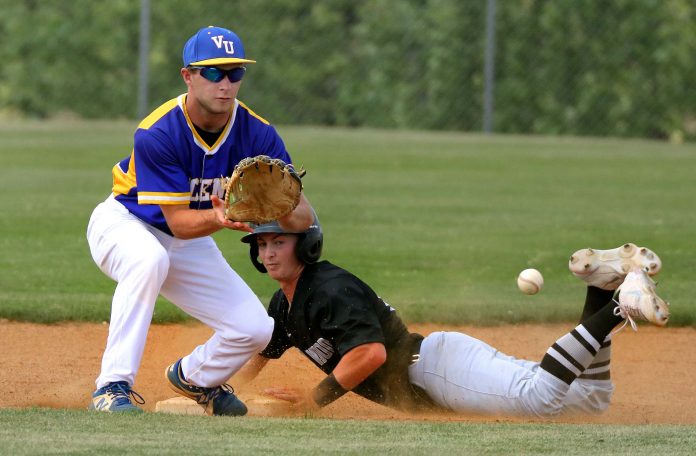 Vincennes earned a spot in the MWAC Conference postseason tournament next week with a game one 7-2 win and continued to better their chances of getting a higher seed with a 5-1 game two win.

John Wood got on the board first in game one in the third inning, taking an early 1-0 lead over the host Trailblazers.

VU responded back in the fourth when freshman Ethan Burdette (Linton, Ind.) hit a sacrifice fly to deep center field that allowed two runs to score and Vincennes to grab a 2-1 lead.

John Wood would et a run back in the sixth before VU would score on a pinch-hit RBI single by freshman Nick Williams (Alexandria, Ind.).

The Trailblazers would hold on to this lead as VU picked up the game one win and clinched a spot in the MWAC Conference baseball tournament with a 7-2 win.

Sophomore Kestler Harbuck (Brooksville, Fla.) got the start in game one and had a really impressive day on the hill throwing six innings, allowing two runs on four hits and striking out six.

Sophomore Braedon Nichols (Sullivan, Ind.) entered out of the pen to close out the final three innings, only allowing two hits and striking out a pair in the process.

Vincennes continued to stay hot into game two, with the first two batters for VU reaching base and later scoring on RBI singles by Connor VanLannen (Clinton, Ind.) and Dale Coy.

John Wood would score a run in the second to cut the lead in half but would not get any closer as the pitching held serve throughout the middle innings of game two.

Vincennes would add some insurance runs in the sixth on an RBI single by freshman Kaden Elliott (New Albany, Ind.) and a two RBI single by Ethan Burdette to give VU a 5-1 lead and needing only three outs to sweep the day.

Sophomore Luke Osborn (Perrysville, Ind.) took the mound and closed out the game with a commanding 10 pitch inning to give the Trailblazers the game two win.

Connor VanLannen got the start in game two, throwing four and one-third innings before having to exit with cramps, allowing one run on five hits and striking out four.

Luke Osborn entered to throw the final two and two-thirds innings, allowing no runs on one hit and three strikeouts.